According to a press release, the large spike in cases is caused by delays in reporting recently from the state electronic disease surveillance system.

The percent of positivity on campus declined in the last reporting period, falling to just under 13 percent from 17.1 percent. The local positivity rate is also falling, but remains in the ballpark of 30 percent.

Additionally, 721 of those who previously tested positive are considered recovered, leaving 772 active cases in the county.

Riley County has documented eight COVID-19-related deaths. The most recent deaths were announced earlier this week after residents from Homestead of Manhattan Assisted Living Facility passed away. There are now three local deaths associated with the outbreak.

The county has identified 15 COVID-19 outbreaks in the community. The Phi Delta Theta outbreak — associated with at least 20 cases — is officially complete.

At this time, there have been 8,025 negative tests administered in the county. Three positive patients are currently hospitalized at Ascension Via Christi.

These numbers may be outdated as Riley County is changing to a “a new infectious-disease reporting system,” an email from the county said last week.

“We’re doing our best, and this is the data we have at this point. We are working to get the information straightened out,” local health officer Julie Gibbs said in a press release. 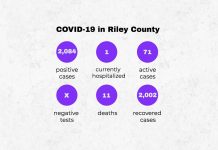 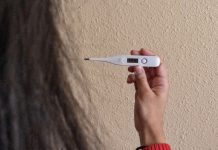 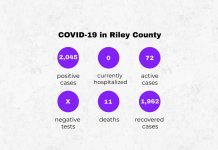