The Kansas State men’s golf team shot 13-over par the first day of the Colonial Collegiate Invitational in Fort Worth, Texas, on Monday, leaving them in fourth place out of 10 teams.

Sophomore Tim Tillmanns carded nine birdies in the opening round, allowing him to tie for ninth place.

Tillmans is two strokes behind the leaders heading into the second day. Freshman Luke O’Neill started off hot, adding six birdies of his own and finished his round one stroke behind Tillmanns.

“It was a grind out there today,” K-State head coach Grant Robbins said in a press release. “It’s a very difficult course. When you factor in the windy conditions it makes it tough to score. I’m happy with how we played. It’s really difficult to focus on 36 holes when the conditions are the way they are, but I thought our guys did a really good job of staying patient and showing a lot of fight. We just have to keep the same mindset tomorrow and keep playing aggressively to conservative targets.”

After the first round, Oklahoma led the field at 3-under par. The Sooners finished under par — the only team to do so. Texas finished four strokes behind.

K-State’s two groups tee-off from hole one at 8 and 8:09 a.m. Tuesday for the final round. All scoring for the tournament can be found on golfstat.com. 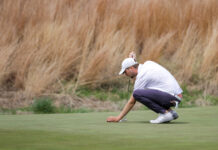 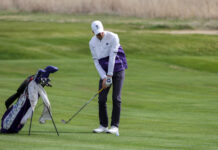