Starting on Monday, COVID-19 tests will no longer be limited to students showing symptoms or who are known contacts of positive cases. As part of a testing expansion plan, interested students can receive free asymptomatic tests.

“There [won’t] be a lot of parameters around it,” Dr. Kyle Goerl, medical director at Lafene Health Center said. “There would be a fairly open opportunity for individuals to come in.”

Students who want to receive an asymptomatic test, however, must make an appointment through the Lafene portal. Appointments are limited from 1 p.m. to 4 p.m. on weekdays, but all students are eligible for asymptomatic tests every two weeks.

“We don’t have unlimited capacity,” Goerl said. “It’s not like all 17,000 students can come and get tested in one week.”

The tests are not the invasive nasal swabs like those administered in disease diagnostic testing, but are still “accurate,” according to a press release. Students will give the test to themselves.

“I do think we’re coming up with a fairly efficient system that should accommodate the vast majority of individuals who are interested in being tested,” Goerl said.

Negative results from asymptomatic screenings will be communicated through the Lafene portal. Students who test positive will be alerted by a phone call. All results should be returned within 72 hours.

Sam Harper, senior in political science and psychology, co-organized a die-in protest in September that — among other things — asked Kansas State administration to increase testing capacity so that any student could receive one if they wanted to.

But they hope the university will consider implementing the other demands raised by the demonstrators, such as mandating students fill out the daily symptom screening survey managed by Lafene Health Center. Something else they want to see is K-State create a mechanism in the campus COVID-19 decision-making matrix that automatically reverts classes to an online-only setting if the positivity rate surpasses 20 percent.

Elliot Young, chief operating officer for university risk and compliance, told Student Governing Association last week that the only way K-State would move to a fully online course modality like it did in the spring semester would be if the state or county ordered it to.

Goerl reiterated as well that the university COVID-19 containment plan is more holistic and focuses on more than just the one variable when making decisions.

“I think we’re backing ourselves into a corner unnecessarily if all we rely upon is positivity rate to make a decision,” Goerl said. “I don’t think that you should build your plans on one single item.” 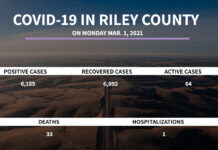 TAKE A LOOK: COVID-19 in Riley County by the numbers on Mar. 1 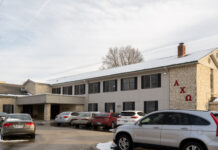 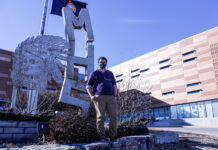