Home Culture Feature ‘Even better than expected’: On the Spot Improv hosts live show on...

On the Spot Improv held a virtual show over Facebook Live Monday night — their first show since March.

“It felt really good,” Brett Broadbent, senior in theatre, said “It was pretty nerve-wracking, at least for me beforehand because it was entirely new for us and we really didn’t know how it was going to go.”

The actors streamed their Zoom call over Facebook and utilized the live chat to interact with the audience.

“I was worried about being on Zoom,” Kailey Mecham, senior in fisheries, wildlife and conservation biology, said. “A part of our improv is interacting with the audience, I was worried we wouldn’t be able to do that but we got to respond to people in the chat so it still felt somewhat normal.”

The audience suggested topics in which the improv actors turned into comedic sketches.

Mecham and Broadbent said the show went “even better than expected.” They experienced minor technical difficulties, but they said they anticipated that.

The actors used the few technical difficulties to their advantage and made it part of their improv.

On The Spot Improv holds virtual shows every Monday on Facebook Live. 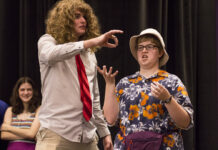 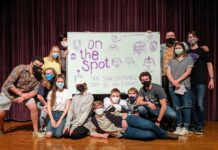 ‘On The Spot Improv’ celebrates first live performance since COVID-19

Photos: On The Spot improvisation show