Her family began raising dairy cattle in the 1970s, and Hanson herself started showing Jersey cows at just two-years-old. She grew up in Wisconsin until her family moved to Ulysses, Kansas, when she was nine.

When Hanson asked Jarrod Blackburn, dairy judging coach, for a letter of recommendation for the scholarship, Blackburn said it basically wrote itself.

“Being in the dairy industry, we have to get up at four or five … in the morning and milk cows every day, they don’t stop,” Blackburn said. “[Hanson] never gripes about doing that. … She just does what needs to get done.”

Hanson said receiving the scholarship alleviated some of the financial burden of vet school.

“I was really excited because vet school tuition is rather high. So, it was really nice to have $5,000 less than I have to pay now,” Hanson said. “I’m very glad to be part of an association that does take good care of its kids.”

Hanson said her desire to pursue a career in agriculture grew as she became involved with FFA and 4H, but she wasn’t interested in being a vet until 2018 when she was interning at a dairy farm.

Hanson spent most of her time at the hospital department where she got to watch and help with surgeries, like handling a displaced abomasum.

“I got to do seven of those, and it was great and I was like, ‘This is it. This is what I want to do for the rest of my life,'” Hanson said.

After graduating, Hanson hopes to open her own clinic in a rural area of Kansas. She said she will likely go back to southwest Kansas as many vets in the area are nearing retirement age.

“You kind of wonder who is going to fill their shoes,” Hanson said. “There is a good opportunity to go back and get some really solid experience under vets who have been doing it longer than I have been alive and transition to taking over their clinic.”

Blackburn first met Hanson 10 years ago and spoke to her consistent work ethic.

“She is very dedicated to her work,” he said. “She enjoys it, it’s not really work to her. It’s something she loves to do. … She cares about people, she cares about animals and she is an amazing person.” 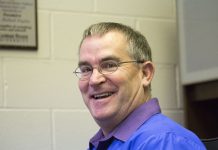