Home News What’s on the ballot: Candidates and issues for Riley County voters

This general election, voters in Riley County have some key contested races and one tax proposal on their ballots. Here are the issues and candidates they could be deciding on.

Riley County voters can vote yes or no to adopt a retailer’s tax of 0.5 percent to pay for city debt, public infrastructure, job creation initiatives and housing initiatives. The reason for this proposed tax is to stimulate economic recovery from the COVID-19 pandemic.

This year, there are five unopposed races on the Riley County ballot, including:

Kansas voters can find a sample ballot for the county in which they are registered on the Kansas Secretary of State website as well as a breakdown of the candidates they have to choose from on the VOTE411 website. 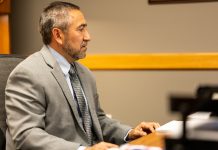