Home Featured Home Football back in action, soccer gears up for multiple matches this week...

Football is back in action, soccer prepares to compete in multiple matches and women’s golf travels to Oklahoma this week in K-State Sports.

Having not competed in a little under a month, the Kansas State women’s golf team is back on the course this week in Stillwater, Oklahoma, at the Cowboy Classic.

The Wildcats will be one of 10 teams competing at Karsten Creek Golf Club on Thursday and Friday this week. Other teams competing include Baylor, BYU, Iowa State, Kansas, North Texas, Oklahoma, Oklahoma State, TCU and Texas Tech.

Each day is set for an 8:45 a.m. shotgun start. Fans will be allowed at the tournament, masks and social distancing are encouraged for spectators.

Live scoring for the tournament can be found at GolfStat.com.


After falling to No. 1 Texas over the weekend, the volleyball team get another test in Bramlage Coliseum this week when Oklahoma comes to town.

K-State took No. 1 Texas to its first five-set match of the season on Friday night. The Wildcats fell to the Longhorns in that match 3-2 and then were swept in the second match of the series on Saturday 3-0.

Oklahoma comes off their first victories of the season, taking down Kansas 3-2 in five sets on Friday, and then sweeping the Jayhawks 3-0 on Saturday.

Both matches are available on Big 12 Now on ESPN+ with live audio on KMAN radio.

‘We’re here to put up a fight’: K-State falters late in loss to Texas

Picking up their first victory of the season last week against Oklahoma, the soccer team (1-4) will have to play two games in four days this week, traveling to Waco, Texas, to take on Baylor (1-2-3) on Thursday and then return home to battle with TCU (4-0-1) on Sunday. Both matches were originally scheduled for different dates, but K-State’s postponement with TCU on Sept. 18 necessitated some scheduling changes.

K-State was originally scheduled to play Baylor this Friday, but because of the TCU postponement, the Bears agreed to play the game on Thursday instead.

Baylor’s record doesn’t show just how good the Bears have performed this year, taking No. 4 Oklahoma State to a 0-0 draw, defeating No. 5 Kansas 2-0 and narrowly falling to No. 7 West Virginia 2-1.

TCU is one of the top teams in the Big 12 Conference this year, sitting at second in the Big 12 standings with one blemish on their record — the tie with Baylor.

K-State will have to have a performance like last Friday night in their victory over Oklahoma if they hope to keep up with Baylor and TCU this week.

The match in Waco is set for 7 p.m. Thursday. The match at Buser Family Park against TCU is set to kick off at 1 p.m. on Sunday.


After a bye week, the football team returns this week to take on in-state rival Kansas in the annual Sunflower Showdown at 11 a.m. on Saturday.

K-State (3-1) is rides a three-game winning streak that includes wins over Oklahoma, Texas Tech and TCU.

The Wildcats face the loss of starting senior quarterback Skylar Thompson, who went down with an upper-body injury in the Wildcats’ game against Texas Tech.

True freshman Will Howard took over for Thompson and has performed well, throwing for 314 yards, rushing for 93 yards and scoring a touchdown through the air and on the ground.

Kansas (0-4) is coming off of a 38-17 loss to West Virginia on Saturday where the Jayhawks recorded just 157 yards of offense and allowed West Virginia to put up 544 yards of total offense.

KU was without their head coach Les Miles on Saturday after he tested positive for COVID-19 on Oct. 8. It is unknown yet whether or not Miles will be available to coach this Saturday against K-State.

The game will be live on Fox Sports 1 and available on the K-State Sports Network. 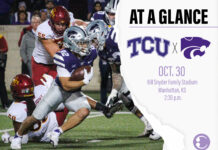 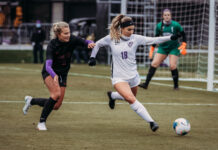