The women’s basketball team had their 2019-2020 season cut short by the COVID-19 pandemic, and now the public health crisis could take its toll on the upcoming season.

“You just don’t know what the future brings,” head coach Jeff Mittie said during a preseason press conference on Thursday.

For now, Mittie said, the team is taking advantage of having the whole roster available to work on new things instead of waiting until later. At any time, COVID-19 cases or exposures on the team could be an interruption to instruction.

The Wildcats’ Big 12 Conference schedule changed from previous years as well. The league moved two games into December, leading to a “log jam of games.”

“That is going to force us to play nine games in a period of 28 or 29 days,” Mittie said. “In that time frame, you’re also going to be wrapping up finals.”

“I think [Lee] is one of the best players in the country,” Mittie said. “As the season progresses, people are going to see how much improvement [she’s made].”

He mentioned that while she played block-to-block a lot at the post, they are finding new ways to use her in the pick-and-roll game.

“We want to make it hard for teams to exactly know where she is going to be,” Mittie said.

He also said her mid-range jump shots improved and that she will have more responsibility than last season.

“Right now, the biggest emphasis is adding the mid-range [shot] and being more aggressive in our offense,” Lee said. “Getting that 15-footer and that 17-foot and just going through contact better than I did last year.”

Ranke missed most of last season because of an injury, but will reaturn this year as a redshirt junior.

“Having Ranke back is obviously big for us,” Mittie said. “Rachel’s a player that has had a lot of success and knows our system and know what we are trying to accomplish here. Just getting her back has been really good.” 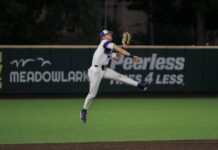