Carlson was elected in 2018, succeeding Republican Susie Swanson. She previously served as a City Judge in Clay Center, Wakefield, Green, Longvale and Miltonvale.

Vathauer ran on Medicaid expansion, transparency and equality, among other things. 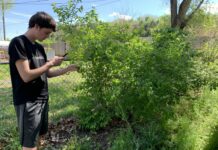 A lot of recent COVID-19 cases are associated with ‘high-risk’ behavior,...