As twin sisters, freshmen Peyton and Presli Pearson have the unique opportunity of playing on the same Division I college soccer team, making their perspective on the game one not many people would understand.

Since they started playing soccer, the Pearson twins always played together.

Both sisters agree playing on the same team and always being together on the field pushes both of them to be the best individual players they can be.

When one of them thinks the other is not recognizing their full potential, they make sure to let each other know about it. Peyton said on more than one occasion she’s done this with her sister. While this may sound harsh, they no longer bat an eye at it, since they’ve been doing it to each other consistently.

Presli is not ashamed to say her sister’s criticism is something that she takes very seriously.

“She’s made me cry multiple times on the field because she was able to talk to me a certain way,” Presli said.

This ability to communicate with each other in their own way has proven to be the most effective manner that helps them both improve.

“They both bring a lot of versatility to the team and a lot of promise, and I think they have a lot of upside for us,” head coach Mike Dibbini said. “[They have a] very good soccer base and very good knowledge of what we need here in this program.”

A driving factor for the sisters is their desire to outperform each other. This competitive spirit they share is what allowed them to garner their accomplishments and get them to where they are today at Kansas State.

One accomplishment they are both particularly proud of is their 2018 Oklahoma State Championship they won at Broken Arrow High School. Peyton and Presli both played pivotal roles that year and helped lead Broken Arrow to an undefeated season.

Dibbini complimented the way both girls dedicate themselves to improving every day. He said if they continue to work the way they have to this point, they’re on the right track to hone their skills even further.

This year marks the first time that Peyton and Presli are not living together, a change that both of them, and coach Dibbini, think has been beneficial.

“Having other roommates gives you an opportunity to grow and that’s what they’re doing,” Dibbini said.

The twins agree they look forward to not having to worry about the threat of COVID-19 in future years and return to a more normal team environment. They also look forward to the day they can finally reap the benefits of the non-stop effort they put in to get to this point.

“We just got to keep going and keep working, and at some point, our hard work will pay off,” Presli said. 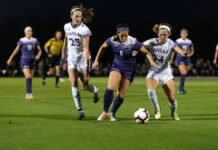 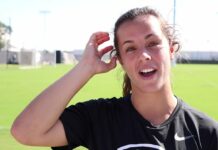 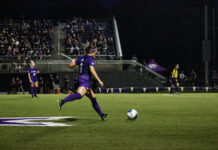