Jacob Evraets, graduate student in architecture, chose to use his senior project to create a visual representation of the relationship between psychology, grief and architecture.

Evraets’ passion for building construction started at a young age when he said he was encouraged to build and play with Legos. Originally from Wichita, Evraets came to Kansas State to study architectural engineering, but pivoted to architecture after a walk through the architecture building.

“I walked through the architecture building and I saw all this creative stuff and these really cool designs they have,” Evraets said. “It pulled me in. I don’t know what it was, but it pulled me in.”

Evraets’ senior project, titled “Facing Grief,” is the culmination of his studies and one of the last things standing between him and completing his degree.

“It’s a play on words because I’m putting faces on each emotive state and I’m also suggesting that people all around us face grief without anyone knowing,” Evraets wrote in an email.

Located by Ackert Hall, Evraets said the project illustrates the materialization of emotion with an interactive exploration of the five stages of grief. Though the system of frames isn’t totally complete quite yet, students can walk through them in the meantime to get a taste of the experience.

“The reason I chose grieving is because it’s relatable,” Evraets said. “Grieving is a process that everybody goes through at some point in their life, whether they’re aware of it or not. It’s something to start the conversation of mental health.”

Evraets has been interested in psychology since high school and is now using his project to explore its connection to architecture.

“Whether we know it or not, a lot of what we do in architecture is affecting the human brain and the human psychology,” he said.

The project’s location makes the five stages of grief structure more interactive, Evraets said, because of the grassy path that many students use as a shortcut.

“I located a shortcut where people will cut through the grass to go from sidewalk-to-sidewalk to show that there are no shortcuts in the grieving process,” Evraets said.

In this sense, Evraets was inspired Robert “Bob” Condia, professor of architecture.

“[Condia] makes you think of architecture as a full body experience, something that people can experience,” Camila Rivera, graduate student in architecture, said.

While Condia said he prefers to let the authors of the artwork speak for himself, he did offer the following comment on the project.

“Jacob has a particular sense of composition on that site,” Condia said.

Rivera said she loves Evraets’ work for illustrating the importance of mental health. 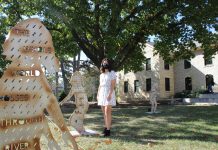