If there’s one scenario the No. 10 ranked Kansas State volleyball is extremely familiar with, it’s the five-set match. The trend of five set matches would continue on Saturday against TCU – the team’s eighth five-set match out of 14 total matches.

Out of 70 possible sets that could have been played so far this season, K-State has played in 60 of them. Even with the long matches, the Wildcats know how to win.

“I think we always know that the team is going to upgrade if they lost the first game and TCU did upgrade tonight,” freshman setter Teana Adams-Kaonohi said. “We knew it from the start, we stayed focused and we didn’t change anything about our game. We just had to come in and work harder.”

Head coach Suzie Fritz was vocal all season about her team’s competitiveness — which showed in the five-set matches. She saw that in the players all along, but sensed a lack of composure at times. On Saturday, she felt like she saw competitiveness and composure come together.

“I think we’re growing up. The competitive-composure to do that right there – and that one was a grind,” Fritz said. “Not all matches feel like a grind. Yesterday’s match felt easy, today felt like a grind. … It was a brand new match. Different match-ups, different personnel, we anticipated different things. I’m really excited about the competitive-composure that I think they’re developing. They have competitiveness, that’s been there all along, but to put those two words together that’s a whole different thing.”

Adams-Kaonohi, who set a career-high with 55 assists against TCU, was also vocal on the team’s mental progression throughout the match.

“I think the game is 90 percent mental and 10 percent physical,” she said. “What happens in your head goes into your body so I think our team does a great job being mentally strong playing those five-setters. Just going all out no matter how tight the game is.”

The Wildcats were also able to win the five-set thriller shorthanded – without senior setter Shelby Martin and sophomore defensive specialist Dru Kuck. Junior outside hitter Brynn Carlson hinted at COVID-19 being the reason for the absences, but K-State Athletics announced they were out for “undisclosed reasons.”

Carlson was pleased with the way her teammates performed this weekend, even with those who were out.

“It just shows our resilience and our depth. Every single person on this team has the ability to come into the match and have an impact,” Carlson said. “We have a lot of confidence, both individually and collectively, in our ability to play and to win no matter who’s here. We knew with COVID, or just like any season with injuries, there’s always the possibility for people to not be here – or play what your traditional lineup is. It’s just a sign of a good team, a great team, that you don’t have to have every one of your starters and you can still win. We showed that tonight.”

The Wildcats were led by Carlson who had a team-high 20 kills on .308 hitting. Freshman Aliyah Carter finished right behind her with 19 kills of her own. Freshman libero Mackenzie Morris led the team with 20 digs. She’s led the team in digs every match this season.

With the win, K-State has clinched their best Big 12 Conference finish since 2008. This season, the Wildcats clinched at least a third place finish, but with a sweep next week against Baylor will finish second.

Next week’s series with the Bears starts on Friday at 5 p.m. in Waco, Texas. The match will be streamed on Big 12 Now on ESPN+. Audio will be available through KMAN radio. 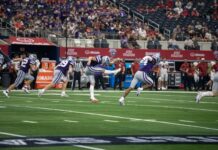 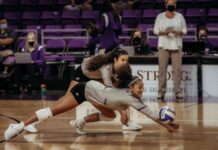