In an interactive presentation sponsored by the Multicultural Business Student Association, Kansas State graduate Risha Grant asked participants to “identify, own and confront” their unconscious bias.

Grant graduated from K-State in 1996 and was a member of the women’s basketball team. Now the CEO and founder of an award-winning diversity consulting and communications firm, Grant strives for everyone to call out the “BS” in their lives.

“BS” stands for “bias synapse,” and compares the unidirectional communication between brain cells to the way we process our biases; in a singular, often negative manner.

“What happens when a person of a different race offends you?” Grant asked. “Instead of dealing with that individual … you will now treat every individual who looks like that person as the one who offended you.”

Grant explained how diversity affects every aspect of life. While she looks at diversity with interest, many people have fears about people different from them. That’s where the real problem lies, she said.

“We don’t have diversity problems, we have people problems,” Grant said. “Diversity is a fact. It is about you as a person and how we become more self-aware of who we are.”

This is where inclusion comes in. The goal of inclusion is making everyone feel “invited, involved and engaged,” but Grant said most places do a horrible job of hearing everyone’s voice.

The best way for someone to become an ally is to address their conscious and unconscious biases or their preconceived and unreasonable emotions towards others.

Grant had participants reveal their own biases, why they had those biases and how they could work on them. She offered a three-step process for those committed to eliminating their biases — identify, own and confront the “BS.”

“It’s the unconscious bias that introduces the ‘us vs. them’ mentality because it’s an unrecognizable part of our upbringing,” Grant said. “We are living through the past hurts, pains and experiences of the people who raised us.”

While the lessons taught are meant to protect, they often end up teaching negative ideas about other groups of people. This contributes to the unconscious bias faced by many.

The first step for those wanting to rid themselves of unconscious bias is to identify the “BS.” Grant said she had early biases towards white people, transgender people, and religion. By identifying her bias, Grant realized most of them were founded in ignorance.

“That’s where a lot of people still are,” Grant said. “They don’t understand, but I’ve done the work.”

Breaking it down further, Grant said she’d recommend assessing who and what makes one uncomfortable, attributing the bias correctly and identifying the issues and experiences that created the bias.

After identifying the “BS,” it’s time to own it. Saying the bias out loud often reveals just how ridiculous it sounds, Grant said.

“When I say ‘I don’t trust any white people in the whole world’ it sounds like the BS that it is,” she said.

The basic lessons five-year-olds are taught come into factor here. Listen when others are speaking, don’t call people names and be nice. Following those simple rules will help drive inclusivity, which in turn saves lives.

“The price of inclusion is so much cheaper than the price of exclusion,” Grant said. “We can’t continue to lose lives because we’re not speaking up.”

Finally, people need to confront their “BS.” This is the action step and is possible through what Grant calls “radical acceptance,” a type of acceptance that allows people to live and belong as an honest version of themselves.

“We’ve got to show up as better people so that we can begin to see the change that we want to see,” Grant said.

The event was moderated by Dr. Olivia Law-Delrosso, Assistant Dean for Diversity, Equity, Inclusion, & Belonging in the College of Business. She hosted a quick Q&A with Grant after the presentation before offering some final remarks.

“I hear so much from my coworkers and our community that we really want action to take place,” Law-Delrosso said. “The beauty is, we all have work to do. We’re all working together to do better for our campus and communities.”

More events similar to Grant’s presentation are set to take place this week as part of K-State’s MLK Observance Week. A full list of the events can be found here. 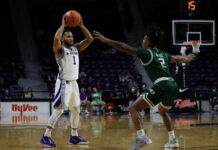