With Super Bowl LV this weekend between the Kansas City Chiefs and the Tampa Bay Buccaneers, our Collegian Sports staff decided to make their predictions for the big game.

If the storylines for this game don’t get you excited, I really don’t know what will. The greatest quarterback of all-time vs the up and coming superstar, the league’s best offense vs the league’s best defense, and of course the first team to play a Super Bowl at their home field — wow.

This game is honestly a toss-up for me. It’s hard to bet against either side. The Buccaneers had glimpses of greatness in the regular season but just couldn’t seem to put it all together — now the team has. The Chiefs, on the other hand, have slipped past many teams this season but are still as dangerous as ever, especially with the way the Chiefs manhandled the Bills in the AFC Championship. I’ve got this game being close the whole way, and we might even see some OT football. I can’t bet against Brady though. I’ve got the Buccaneers.

The Chiefs have hurt me in the playoffs so much throughout my life. There was the no-punt game, the Colts’ huge comeback, the Dee Ford game, the Steelers winning with only field goals, the forward progress game and of course there was the time Marcus Mariota threw a TD pass to himself to jumpstart a comeback.

Thankfully, Patrick Mahomes has exorcised a lot of those demons in his three years as a starter. Now he gets a chance to get Tom Brady off this franchise’s back. I expect a shootout, which plays into the hands of Patrick Mahomes late. I just cannot justify betting against the guy, even with the greatest of all time on the other sideline. I’ve got the Chiefs.

Coming into the big game, everyone thinks this one is going to be a shootout between Tom Brady, the greatest of all-time, and Patrick Mahomes, the young-gun. But with a 75 percent chance of rain, that could mean this one could come down to the running game. If the game does come down to the rushing attack, the way the Chiefs offensive line is banged up, I believe that the Buccaneers defensive-front will have a field day.

Passing will still play a factor, but with Tampa Bay’s running capability and the team’s effectiveness with throwing the ball, I see the Buccaneers managing this game well – much like the team did against the Chiefs in the last three-quarters of the game earlier this season. As a lifelong Patriots fan — and with logical reasoning — I just don’t see how you can pick against those “Bad Boys” down in the bay. With the way its playing as of late, I’m taking the Buccaneers.

I’ll start with this — I think we all know that when the Chiefs “flip the switch,” its without a doubt the best team in the NFL. Because of this, it’s worth noting that the Chiefs flipped that switch earlier last week than we’ve typically seen.

You know the story.

Last year in the playoffs, the Chiefs had comebacks in each game en route to the Lombardi trophy. My concern with the Chiefs is flipping that switch too late. If the team can’t seem to turn it on until the fourth quarter, and the Chiefs are down big at that point, it might be in trouble. But my point is this, in the two playoffs games this year, that hasn’t been an issue. For some reason I think the fact that the Chiefs weren’t clobbering opponents late in the season made people think the team wasn’t still simply the best team in the league. The Chiefs are. I think the Chiefs win and cover the 3-point spread easily.

I think this game comes down to three simple phases of the game.

First, the Buccaneers might just have one of the best defensive lines in the entire NFL, giving the team the edge on the defensive side of the ball.

Second, the Chiefs have one of the most electrifying offenses I have ever seen, giving the team the edge on the offensive side of the ball.

Third is special teams, which goes to the Chiefs as well, as long as Mecole Hardman isn’t returning punts. Just put Byron Pringle back there and the Chiefs should be fine. Andy Reid’s career, in my opinion, might be unmatched by any other current head coach in the league. The man is on an island by himself at this point. I’ve got the Chiefs.

This game will be decided by the battle in the trenches and the battle between 12 and 15. The most glaring stat coming into this game is the Chiefs having all five linemen as replacements to the original starting five at the beginning of the season. How they will stack up against the best defensive line in the NFL — that just two weeks prior sacked Aaron Rodgers five times — is going to be the big difference in this game.

Tom Brady looks to remind everyone why he is the G.O.A.T. while Mahomes looks to supplant his claim and make a case for himself. The battle between the two should be legendary and have no shortage of drama. I think the Chiefs take this one, but late in the fourth quarter.

In all my years watching sports, I don’t think I’ve ever seen a Super Bowl with a better story.

The biggest question the Chiefs need to answer is if the team can put pressure on Tom Brady. If Chiefs give Brady all day to throw and he doesn’t feel out of his rhythm, he’ll dink and dunk and get first downs all day. The biggest question the Buccaneers will have to answer is if the team can do what the Buccaneers couldn’t do in week 7 and slow down the Chiefs’ offense. They can’t afford to let this game turn into a shootout like the last one. I wouldn’t be surprised to see whichever team has the ball last winning the game. I’m picking the Chiefs to be that team. 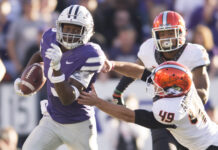 From community college to Super Bowl champion: Byron Pringle chases his second ring in his hometown