Home News Campus ‘We don’t have to have animosity’: CAT panelists break down the 2020...

After a tumultuous election cycle and unrest in recent months, several panelists at Thursday’s Community Action Talk said they’re encouraged by the ongoing discussion of the nation’s political climate, specifically among young people.

Amid state and nationwide shutdowns because of the pandemic, Schwab said his biggest challenge during the 2020 election was finding a way to keep polling places open. Young voters made this possible, he said.

For the first time in state history, Schwab said, many polling places throughout Kansas were overstaffed because young voters turned out to help.

Now in office, the new administration can begin working on campaign promises. President Joe Biden promised to create the most diverse cabinet in history during his campaign.

“This is important because it puts our presidential cabinet in the same position as other nations who are leading the way in gender parity,” Heidbreder said.

She said the Biden administration will make history in a couple other ways as well, as diversity among other demographic characteristics has increased.

This doesn’t mean there isn’t still work to be done, Heidbreder said, since the president’s “inner cabinet” still consists of mostly white men.

Expanding on the discussion of the Biden administration’s progress, Nathaniel Birkhead, associate professor of political science, predicted the democratic party will have its way with its COVID-19 response package, but “not much else.”

“I would not expect a lot of major legislation to go through, simply because they don’t have the votes necessary for it,” Birkhead said.

Schwab and Timothy Shaffer, associate professor of communication studies, said they’re happy about the way the 2020 election went in Kansas despite the challenges posed by the pandemic.

As a traditionally red state, Schwab said Kansas didn’t face much speculation on voter suppression or voter fraud as other states like Pennsylvania, even with a large increase in mail-in voting.

“I love the way that this election cycle went,” Shaffer said. “It was phenomenal to have the opportunities of access and ease. Kansas makes it accessible, and appropriately fair and equal.”

How #BlackAtKState initiated a push for institutional change

While voting went smoothly for many throughout Kansas, Shaffer said he remains concerned about the state of the nation’s unity. The insurrection of the U.S. Capitol in early January highlights the fragility of any self-governing democratic society, he said.

“We’re at a boiling point in many regards,” Shaffer said.

Despite incidents of unrest, Heidbreder said the government is becoming more representative of its voters.

“We do have some evidence that there was a surge in voter turnout … particularly in rural Black counties, diverse counties in metro-Atlanta … and in certain areas of the country,” Heidbreder said. “There is a desire to see a more diverse government. Race and gender, yes. Age, not so much. As an institution, it is probably not representative of the U.S. population in terms of age.”

It’s dangerous to begin viewing politics as a sport, he said, as many Americans side with their party rather than considering individual problems and policies.

Shaffer called this the “gameification” of politics.

Birkhead said associating one’s identity with political affiliation contributes to this “gameification” and creates a loss of touch with what one’s politics actually means.

“It doesn’t actually have much policy bearing whatsoever,” Birkhead said. “It operates on a symbolic level. People … will fight and hate each other. If you get them to not think about that, and instead just discuss a reasonable way to address gun control … not thinking in partisan terms, we actually do a pretty good job of coming together.”

When politics aren’t about what “team” someone is on, it’s easier to lose attachment to those ideological identities, Birkhead said.

Then, voters are forced to address what the government is actually doing.

“We don’t have to have animosity,” Birkhead said.

In closing, Shaffer encouraged viewers of the Community Action Talk to consider politics not as something that occurs elsewhere and at the hands of other people, but as the daily act of listening to understand.

A recording of today’s and all past Community Action Talks is available on the K-State Diversity and Inclusion website. 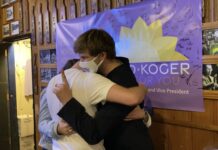 OPINION: Don’t destroy the US in 2020, polarization helps no one