The women’s basketball team missed five straight Big 12 Conference games in January because of a COVID-19 outbreak among the players which put the program on a nearly month-long pause. The missed game against Oklahoma State was rescheduled and played on Jan. 25 and the Wildcats fell 69-55 — one loss in their 10-game losing streak up to this point.

The other four games missed include a Jan. 2 matchup at Oklahoma, a Jan. 5 home game against West Virginia, a Jan. 10 showdown at Baylor and a Jan. 14 home contest with TCU.

After the trip, the Wildcats will return home to host TCU on March 1 and West Virginia on March 3 with both games starting at 6:30 p.m. and airing on Big 12 Now on ESPN+.

K-State then finishes off its regular season in Norman, Oklahoma, against the Oklahoma Sooners at 3 p.m. March 7. Viewers can watch the game on FOX Sports Oklahoma.

K-State is currently 5-12 overall and 0-10 in Big 12 play. The rescheduling gives the team a total of eight remaining regular-season games to complete the Big 12’s double-round robin schedule.

Following those games, the Wildcats play in the Big 12 Tournament starting on March 11 and ending March 14 in Kansas City, Missouri. 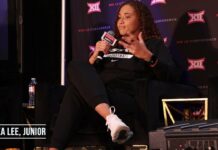 Men’s basketball turns in another top 30 finish in attendance