Even in the losing effort, sophomore Antonio Gordon collected his first double-double at K-State. The 6-foot-9 sophomore recorded 15 points and 14 rebounds on Saturday afternoon.

K-State struggled in the first half, shooting 25 percent from the floor and recording zero threes. Oklahoma State went 11-of-29 but created some separation by going 5-of-17 from behind the arc to lead 35-19 at the half.

“The first half, we came out kind of sluggish,” Gordon said. “I feel like the second half we definitely picked it up. Defensively we had some good stops, but we just have to be able to score the basketball and make little hustle plays down the stretch.”

The Wildcats shrank the lead to single digits in the first five minutes of the second half, going on a massive 18-3 run to make the score 41-37 — the closest the game would get.

Oklahoma State responded with a 7-0 run of its own in under a minute that was helped by three straight Wildcat turnovers, pushing the Cowboy lead back up to 48-37 and creating enough distance to essentially put the game to bed.

K-State shot 55 percent from the floor in the second half and outscored the Cowboys 41-32 in that half as well but could not overcome the hurdle created in the opening period.

“We just didn’t make enough plays that would have kept us in there,” K-State head coach Bruce Weber said. “Obviously, it would have been nice to keep it around ten … but we just didn’t have anything in the tank.”

Freshmen duo Nijel Pack and Davion Bradford each had double-digit afternoons, including 12 second-half points by Pack. The Wildcats finished shooting 39 percent from the floor.

Antonio Gordon led the Wildcats with 15 points and 14 rebounds in his third straight start. He performed well while filling in for DaJuan Gordon, who has missed four straight games due to an ankle injury.

“I am very proud of Antonio the way that he is playing and his performance,” Bradford said. “He’s rebounding, finishing and doing everything the coaches and the team need him to do.”

It was the second time this season that Gordon has led the Wildcats in points. He scored a career-high 23 points against Baylor in December.

K-State only had 14 turnovers, but the Cowboys took advantage with 27 points off of the free possessions.

“We just gave them too many second-chance points and points off turnovers,” Weber said. “Those were big difference makers.”

The Wildcats contained freshman guard Cade Cunningham in the first half to only three points. Cunningham had only five points in the 70-54 victory for the Cowboys in Manhattan in January, the highlight of the first matchup between the two teams.

The projected number one pick went off in the second half, scoring 12 points to finish with a team-high 15 points.

The Wildcats will host Kansas on Wednesday night in the second edition of the Sunflower Showdown this season. Wednesday’s game will end a five-game stretch for the Wildcats with matchups against teams ranked or receiving votes in the Associated Press (AP) top 25.

Tip-off with the Jayhawks is slated for 7 p.m. on Big 12 Now on ESPN+. In The Bruce Weber Era, the Wildcats are 3-5 at home in the Sunflower Showdown. 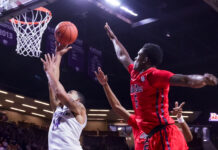 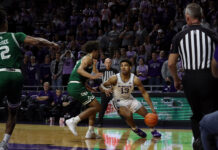