Cuts for postsecondary education across the state total over $3 billion, according to the agency’s report. Among those cuts is a potential 5.5 percent cut for K-State.

“The governor’s proposed budget is only a starting place and given the dynamics of the legislature could change significantly,” President Richard Myers wrote in the Jan. 21, 2021 edition of the K-State Today.

“The proposed budget calls for a significant decrease in state funding for higher education, including Kansas State University. The 5.5% proposed cut for K-State would be the most significant budget reduction since 2009,” Myers said.

Given the proposed cuts and their potential impact on the university, the president presented to the Senate committee on Monday, as well as the House committee on Wednesday, prior to their vote.

Ernie Minton, dean of the College of Agriculture and director of K-State Research and Extension, asked if the sub-committees gave more in-depth responses to the presentations Myer’s gave earlier that day.

Among the many questions the House asked, one addressed why they should give more money when enrollments are declining.

“We were prepared,” Peterson said. “[The president] talked about programs. We used the nursing program and the PA program as programs that are intensive, that are good programs for bringing people in.”

The president emphasized the high expense of delivering extensive science and lab programs as a research I university, especially when compared to institutions that only involve undergraduate teaching.

Peterson said a member of the committee questioned why new programs were being started.

“It’s sort of interesting they ask, ‘Why are you starting new programs?’” John Buckwalter, dean of the College of Health and Human Sciences, said. “The simple answer is because students want them.”

Buckwalter said there’s innovation in the marketplace, including the university.

One factor for a research university is personnel cost. This is because the people being recruited have a different skill set than those at a teaching-only institution. As a result, personnel costs are higher.

“Further to that point, this university does regard its primary mission as educating students,” Minton said. “We also do research and extension and outreach. And I would say K-State’s footprint in research has grown remarkably over the years.”

Peterson said she highlighted the COVID-19 research from the College of Veterinary Medicine to emphasize the importance of research, facilities and how it has an impact on the state.

Peterson also mentioned the $10.3 billion appropriations to the Kansas Board of Regents to be allocated at their discretion.

Speculation emerged that the funds could be used for a 2.3 percent pay increase at regent institutions. Peterson said KBOR is under no obligation to use the funds in that manner and have no plans for the funds at this time.

The next legislative review session is scheduled for noon on Friday, Feb. 19, via Zoom. Attendees must have a K-State eid and password to join the session. 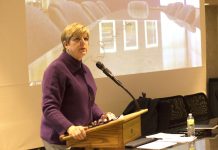