After picking up the first conference win of the year, the women’s basketball team (6-12) will go on the road twice this week and try to pick up two more conference wins.

The women’s team ended its 10-game skid on Saturday with a 77-66 win over Kansas in Bramlage Coliseum. K-State will look to carry luck into Stillwater, Oklahoma, on Wednesday against the Cowgirls.

The Wildcats meet a tough challenge in Oklahoma State (15-6) with hopes for a different outcome from the last meeting, when the Cowgirls beat them in Manhattan. Tip-off is at 6:30 p.m. with radio coverage on the K-State Sports Network and broadcasting through Big 12 Now on ESPN+.

Kansas State will look to avenge another earlier loss from the season against Texas (14-5) on Sunday. The last time these two met, it came down to the wire courtesy of a furious fourth quarter comeback by the Wildcats. The team shot an impressive 47 percent from the field during the first match-up but were plagued by 38 turnovers.

Tip-off will be at 2 p.m. against the Longhorns and will be broadcasted on the Longhorn Network with radio coverage on the K-State Sports Network.


The men’s basketball team has two games this week including the Sunflower Showdown against Kansas (15-7) at home on Wednesday and a trip to Fort Worth, Texas, to play TCU (11-8) on Saturday.

The Wildcats will try and topple KU for the first time since 2019 when they face off in Manhattan this week. The Jayhawks are in unfamiliar territory at the moment after several games of poor play have left the team unranked with K-State looking to take advantage.

TCU will face off against the Wildcats on Sunday where K-State will try and even up the season series after losing to the Horned Frogs in January.

The game against the Jayhawks is set to tip off at 7 p.m. with coverage on ESPN+ and radio coverage on the K-State Sports Network.

TCU and K-State will tip off at 4 p.m. on Saturday with coverage on ESPN+ and the K-State Sports Network. 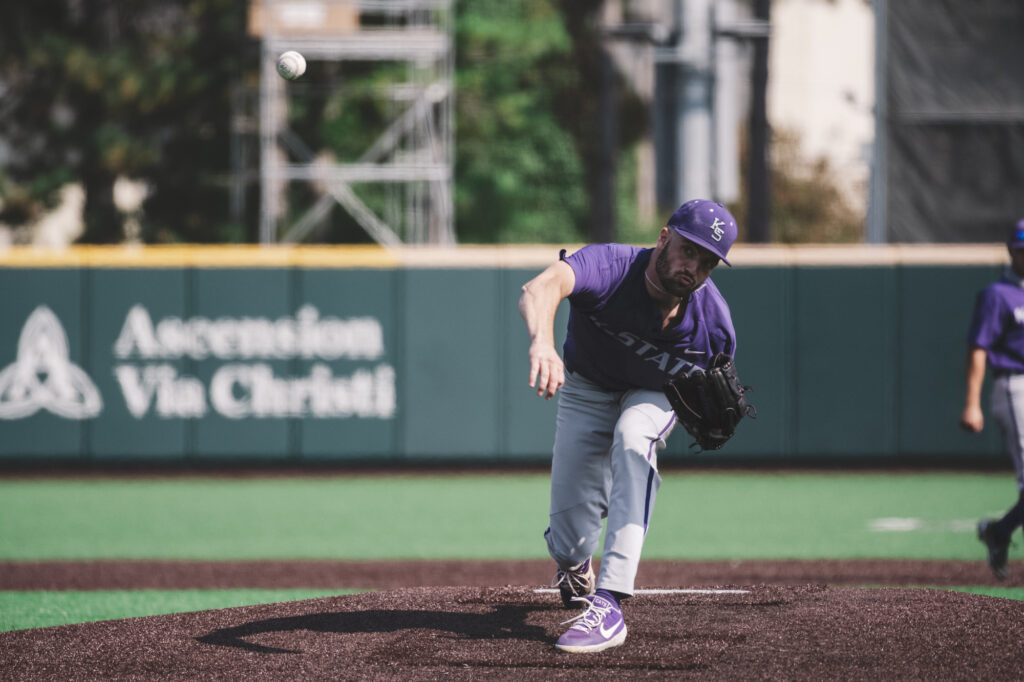 The baseball season gets underway this week with K-State opening up in the Sanderson Ford College Classic in Surprise, Arizona. It will be a busy opening weekend for the Wildcats with games on four-straight days.

K-State’s season opener will be against Oregon State on Friday. The Wildcats are 4-8 historically against the Beavers and the two teams have not met since 2016, when Oregon State won. First pitch is set 1 p.m. and will air live on FloSports, with radio coverage available on the K-State Sports Network.

The Wildcats face off against Gonzaga on Saturday, with first pitch set for 6 p.m. The game will also air live on FloSports with audio on the K-State Sports Network.

On Sunday, the Wildcats will play New Mexico. The Wildcats are 2-0 historically against the Timberwolves and they look to stay undefeated come Sunday. First pitch is at 6 p.m. with coverage through the same networks and platforms.

The track and field squad looks to continue shared dominance on Sunday at the Steve Miller Open at home in Manhattan.


Fresh off winning their first matches of the year over the weekend, the tennis team has two more home matches against Wichita State and Arizona this week. After starting off 0-2, victories over Drake and Denver got the team in the win column, and they will look to preserve their perfect home record.


Men’s golf looks to build off their recent success this week in Mobile, Alabama, at the Mobile Bay Intercollegiate. The tournament started on Sunday, and the Wildcats currently sit in sixth after the first day.

Sophomore Tim Tillmanns and junior Will Hopkins will try and replicate their top-10 finishes from their last tournament.

The tournament spans three days and will wrap up on Tuesday.

K-State outlasts Texas Tech 30-27 in a second-half shoot-out to improve...