The Wildcats return to the baseball diamond with a four-game opening stretch starting this Friday. Kansas State faces off against Oregon State, Gonzaga and New Mexico in Surprise, Arizona, the spring training home for the Kansas City Royals and Texas Rangers.

K-State opens with Oregon State, winners of the 2018 College World Series. The Wildcats face off against Gonzaga on Saturday and Monday, followed by a matchup with New Mexico on Sunday.

Each opponent reached the NCAA tournament since K-State’s last appearance in 2013. The Wildcats hope to take one step closer to Omaha, Nebraska, led by an experienced pitching staff and momentum from the 2020 season.

The Wildcats went10-7 and won seven of the last nine games before the COVID-19 pandemic put a sudden halt to the season. The entire starting nine and the starting rotation return for the 2021 season.

The Wildcats pitching staff boasted the sixth-best earned run average in the nation with a 2.07 ERA in the shorted season. The Wildcats look to build off this momentum, led by sophomore pitcher Jordan Wicks.

Wicks is listed as a top ten prospect according to D1Baseball heading into 2021 and earned the title Big 12 Preseason Co-Pitcher of the Year. The southpaw posted a .35 ERA last season, which placed him in the top-10 nationally. He will toe the slab in the season opener for the Wildcats.

Redshirt Freshman Connor McCullough will get the nod on Sunday. The Arkansas transfer struck out 29 in four starts with an ERA of 2.25 in his first season as a Wildcat.

Senior pitcher Kasey Ford is slated to start the finale against Gonzaga on Monday. The fifth-year right-hander enters his fifth season at K-State and is the backbone of the pitching staff with 113 career strikeouts as a Wildcat, including a 45 strikeout season in 2018.

The K-State bullpen found success in the 2020 season and combined for a 1.72 ERA with 61 strikeouts. Before the shutdown, the Wildcats held a 22 inning scoreless streak out of the pen.

Offensively, K-State brings back every statistical leader from 2020, including sophomore infielder Daniel Carinci, who hit a .373 batting average before the shutdown.

The Wildcats also return some hot bats to add a jolt to the K-State offense in junior outfielder Zach Kokoska and senior catcher Chris Ceballos. Kokoska shined in the 2020 season with a .446 on-base percentage in 17 games and holds a .335 batting average as a Wildcat. Ceballos led the Wildcats with 40 RBIs in 2019 but dipped slightly in 2020 with a .212 average and eight RBIs in 16-games.

K-State missed the Big 12 Conference tournament three times since 2013 and has not been higher than the eighth seed since 2015. The Wildcats look to return to the tournament this year.

The Wildcats open the season with a matchup with Oregon State on Friday. The first pitch is slated for 1 p.m. and is available on KMAN radio. 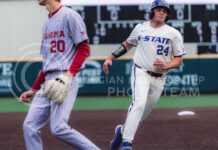 ‘It’s a game that we should have won’: Wildcats extend losing...