The Wildcats kicked off the season opener with a 3-2 win against Oregon State on Friday afternoon — the first opening day win since 2016. This is the first of four games in the Sanderson Ford College Classic in Suprise, Arizona.

Sophomore pitcher Jordan Wicks (1-0) tossed seven scoreless innings and struck out ten with two walks in his season debut. The Big-12 Co-Preseason Pitcher of the Year and Golden Spikes Award candidate played well on the mound with 67 strikes of 102 pitches and only three hits.

Redshirt junior pitcher Taylor Eckburg recorded his first save of the season after a leadoff single in the bottom of the ninth.

Freshman Nick Goodrum went 1-2 with three walks and two RBIs in his debut as a Wildcat. Senior center fielder Caleb Littlejim went 2-3 at the plate at the nine spot with an RBI as K-State left 11 on base on only three hits.

The Oregon State pitching staff combined for seven walks, striking out ten, but the Wildcats cashed in by scoring off two of the three hits.

Junior catcher Troy Claunch went 2-3 with a walk, which led the Beavers, and junior second baseman Ryan Ober went 1-4 at the plate but notched two RBIs with a home run. The Beavers finished the afternoon with six hits and left five on base.

Kansas State struck first with two runs in the fifth inning on a two-run double by Goodwin. Littlejim extended the lead to 3-0 with a two-out double in the sixth inning.

Ober put the Beavers on the board with a two-run home run. It was the first run allowed by the K-State bullpen in 22.2 innings, dating back to last season.

Oregon State opened the bottom of the ninth with a leadoff single by Claunch in a 3-2 count, ten pitch at-bat. Eckberg bounced back with a strikeout, fly out to center and a second strikeout to seal the game for the Wildcats.

The Wildcats will play Gonzaga at 6 p.m. Saturday, which can be heard on KMAN radio. 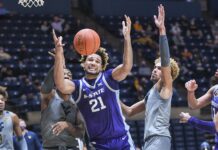 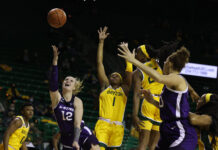 ‘They whipped us in the paint:’ No. 7 Baylor pounded K-State women’s basketball team 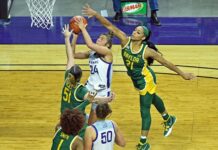