Michael Dowd, senior in animal science and global food systems leadership, will be the next student body president at Kansas State.

The results came after a months-long process of preparation from both campaigns, and show that Michael Dowd and his running mate Cameron Koger, junior in marketing and student finance director, received 1,517 votes, amounting to more than 64 percent of the vote.

“We couldn’t have done this without the students,” Koger said. “And that’s not something that we’re going to forget. The students got us here. … We’re going to return the favor by leading for students.”

Koger said he was “over the moon” for the opportunity to get to help students to make K-State a better place.

“We’re ready to move forward, ready to get to work,” Dowd said.

Vedant Kulkarni, international affairs director and senior in management information systems and mass communications, fell behind. He received around 850 votes, good for just under 36 percent of the vote.

“I believe in the philosophy ‘it’s more in the journey, not the destination,'” Kulkarni said. “All the work we have put in, all the late nights, all the late-night conversations, we are extremely proud [of running].” 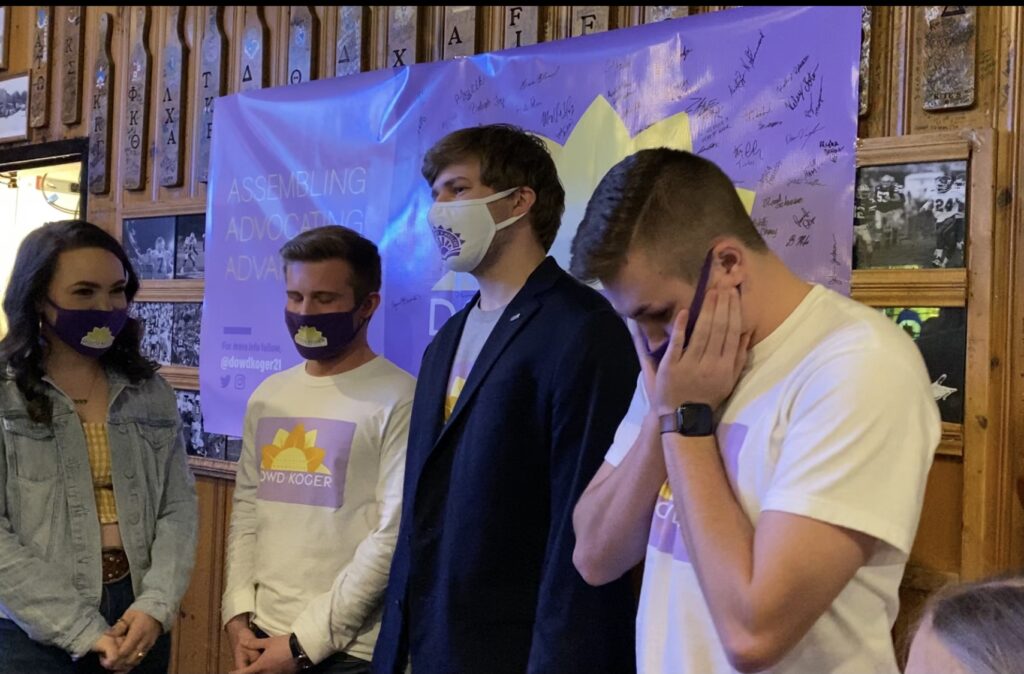 Koger said Kulkarni and his running mate, Maggie Billman, sophomore in secondary education, were “awesome” through the process.

“We could not have asked for more kind, caring candidates to be running against, and their commitment to win, lose or draw,” Koger said. “We took the same approach [to] still be committed to helping students. That’s what we need in our elections for SGA.”

The transition process will begin in the coming weeks. Dowd and Koger will start meeting with the current executive branch of Student Governing Association.

“I mean, it’s just time to roll up our sleeves and get to work,” Koger said. “We’re going to be working hard in the next couple of weeks getting transition documents in place from the current administration figuring out, like the more intricate details that you don’t necessarily see.”

Koger said they wanted to be the most approachable duo from day one, and they want to continue this trend by making sure students know where their office is, which is located in the Center for Student Involvement.

“I want [students] to know when we’re in there. And we want to, like, give them that opportunity to have direct contact with the people that they elected,” Koger said.

Kulkarni said this loss will not be the end to his involvement on campus.

“We really, really look forward to helping Michael and Cameron in their administration and we’ll find different ways to stay involved around campus,” Kulkarni said. “The work doesn’t stop. Come tomorrow, the work will start again.”

Billman said she cannot thank the campaign team enough, and the intentions for their campaign and Dowd’s and Koger’s are for the best intention of the students.

“Cameron, Michael, Vedant and I have worked really really hard to maintain a positive relationship throughout the running,” Billman said. “We all have the best for campus in our hearts and in our minds.”