The Kansas State volleyball team (11-7) needed a spark after last week’s loss to Texas State. The team blew a 2-0 set advantage, lost in five and then came out lackluster in a first set win against Saint Louis on Sunday.

Freshman Jayden Nembhard provided that spark to start the second set which ultimately paved the road for others to get going offensively on the team’s way to a 3-0 sweep.

“It hurt last week after losing,” Nembhard said. “We had to come back this week and just finish — finish that last set for sure. We didn’t want to go an extra set with them. We wanted to finish the game.”

Even though the statistics don’t jump off the page, K-State played efficiently throughout the match — enough at least to not let go of its lead. As a team, the Wildcats hit .275 for the match and held the Billikens to a very low .118 hitting percentage.

Head coach Suzie Fritz noted the match wasn’t necessarily clean but was happy with the outcome of the match.

“I didn’t think we were particularly clean in that one, the staff and the team thought there were a lot of ebbs and flows throughout the match that didn’t allow us to consistently put point runs together. But in the end, it’s a high efficiency (win),” Fritz said.

Freshman Aliyah Carter echoed her coach, saying how nice it was for this match not to slip away.

“Being up 2-0, there’s something like an emotional block goes up,” Carter said. “We just need to get that third one because the other team will come out swinging with nothing to lose. I think we did just that.”

Carter finished the match with a team-high 13 kills on .296 hitting.

With NCAA Tournament hopes on the line down the stretch of the spring season, Fritz is hoping to see improvement at the net from her blockers.

“I think our blocking has to be better,” Fritz said. “We did block some balls, but blocking isn’t all about the ones you stuff. It’s also about your ability to control the ball and turn the ball on transition. I still think we’re getting too many non-productive touches with our block. … Some of that’s technique. Some of that is instinct. I still think we can get a lot better there in the next two weeks.”

K-State will have another chance to bolster its NCAA Tournament resume on Saturday when the team hosts No. 23 ranked Creighton in Bramlage Coliseum. The match starts at 6 p.m. with no broadcasting coverage. KMAN radio will provide audio coverage for the match. 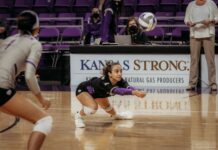 Cross country finishes with two Wildcats in top-25 at Big 12...