Sophomore runner Jaybe Shufelberger became the first Kansas State cross country member to compete in the NCAA Cross Country Championships since 2014 on Monday morning at the OSU Cross Country Course in Stillwater, Oklahoma. She finished with a time of 21:54.5 – taking 157th place out of over 400 runners in the 6K race.

“Jaybe ran close to the same time as she did this fall,” head coach Ryun Godfrey said in a K-State Athletics press release. “She did a nice job.”

The placing was just the eighth time since 2003 that a Wildcat has finished 170th place or better in the women’s competition.

Holding steady in the 186th position after completing 2000 meters, Shufelberger managed to climb 29 spots and finish her meet in the 157th position. Even though Shufelberger only finished behind seven other Big 12 Conference runners, the sophomore from Topeka didn’t hit her expectations.

“I didn’t place to my expectations in the race,” Shufelberger said in the release. “I just wanted to go out there and see what I could do. Just being able to represent K-State at the national meet was such an honor.”

Shufelberger’s strategy throughout the race was to start conservatively so that she could climb up near the end of the race, passing others that started out quick, and didn’t have much gas left in the tank.

BYU earned the team championship, having four women place in the top 30 of the 6K race, giving them a team total of 96 points. The Cougars defeated runner-up finishers NC State by 65 points as the Wolfpack finished with 161 points.

Alabama’s Mercy Chelangat captured the Crimson Tide’s first-ever individual National Championship in the program’s history. The junior from Kericho, Kenya finished with a time of 20:01.1.

Oklahoma State’s Taylor Roe was within six seconds of Chelangat, finishing as the runner-up with a time of 20:06.7, the highest finisher for the Big 12.

The championship is typically held in the fall, but because of the COVID-19 pandemic, it was rescheduled for Monday, just two days after the NCAA Indoor Track and Field National Championships.

Thus, the 2020 cross country season is now concluded for the Wildcats. Both the men’s and women’s teams had top-five team results in each of their four meets, including the first time both teams finished in the top-five at the Big 12 Conference meet since 1998.

“We will take a little time off now and then ramp up training again in preparation for the Big 12 (outdoor track and field) meet in Manhattan,” Godfrey said. 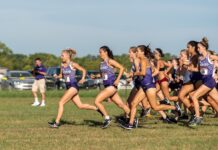 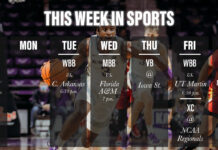