It’s time for March Madness. The 2021 NCAA Division I Men’s Basketball Tournament kicks off this week after a one-year hiatus from the tournament.

Finally, fans can fill out their brackets once again to determine who is the king of the dance. Those fans include our very own Collegian sports staff who submitted their own picks for the crown jewel of college basketball.

After a year of uncertainty and pain, March Madness is finally back. With the tournament back — which I’m thrilled about — it’s also time for kerosene on brackets and heartbreak. It’s a true love-hate tradition that I never want to lose again.

Favorites: This year’s tournament favorites are pretty clear — Gonzaga and Illinois. With the experience and talent throughout it’s really a no-brainer. As 1-seeds, they don’t need an introduction. My one dark horse of a favorite though is 3-seed Texas out of the east. The Longhorns have it all — a great back-court, future pros down low and a head coach who’s experienced a Final Four before in Shaka Smart.

Upsets: With the way college basketball played out this year, expect some upsets. I think the most obvious one is 12-seed Winthrop over 5-seed Villanova — with Collin Gillespie out for the Wildcats, I’m not giving them a chance. I’ve also got UC Santa Barbara over both 5-seed Creighton and 4-seed Virginia on its way to the Sweet 16. Look out for 13-seed Ohio and 11-seed Syracuse to flirt with upsets as well.

Cinderellas: 11-seed Syracuse is the most intriguing Cinderella candidate. The Orange are hot and all you need to know is that they’ve got Jim Boeheim at the helm — who’s built for March. I’ve also got 8-seed North Carolina making a run to the Final Four. And as previously stated, those Gauchos from UC Santa Barbara are winning at least two games.

Champion: With a Final Four of Gonzaga, Texas, UNC and Illinois, I’ve got the Fighting Illini over the Bulldogs, 71-66. The duo of Ayo Dosunmu and Kofi Cockburn will just be too much to handle. The Illini are deep and play great defense. With the way they’ve been playing as late, expect Brad Underwood’s team to cut down the nets in Indianapolis which will be a bittersweet sight for K-State fans.

Anecdotally, it feels like the most exciting regular seasons and conference tournament seasons lead to the most chalk brackets. When people say ‘March is going to be wild this year,’ I tend to lean toward fewer upsets. Part of that is hedging and playing the probability game and part of it is that upsets in conference tournaments mean bid-stealers, which means underqualified teams make the tournament.

Favorites: I think Alabama is undervalued in a lot of people’s analysis of the tournament. They fit on the two-line, but I have them sliding past Michigan. I also think highly of the Big 10’s second-tier teams: Purdue, Rutgers and Wisconsin are all winning at least their first-round game in my bracket.

Upsets: In terms of early-round upsets, I look for mid-majors with a lot of wins or major-conference teams that are on low seed lines. I like Patrick Ewing’s Georgetown team, Virginia Tech and UC Santa Barbara. I’m also not high on Michigan. Baylor has been questionable at best since its COVID-19 hiatus earlier this year. I do not trust undefeated mid-majors teams in March either, so no Gonzaga in the Final Four.

Cinderellas: I am notoriously bad at choosing Cinderellas, and picking them in your tournament can be fun but it is a huge risk. The highest seed I have making the second weekend is a pair of six seeds: USC and BYU. I think BYU is undervalued and I do not trust Texas. USC makes the Sweet 16 thanks to a Kansas team that I am not convinced will be healthy.

Champion: Illinois. Sharpie. I have been really impressed with Brad Underwood’s work at Illinois and I think he brings the Illini a banner this year. They roll through Drexel, Loyola, Tennessee, West Virginia, Ohio State and Alabama to a title in my bracket.

Oh baby, do we have a good tournament this year! I think we have a great chance at seeing some upsets and some lower seeds defying expectations. With that being said, I do think we have some odds on favorites out of the gate that you can easily take or bet on to go pretty far in the tournament.

Favorites: Of course, everyone knows that Gonzaga is good. That is no surprise at all, but, let me introduce you to the midwest region of the bracket. Illinois, Houston, Loyola Chicago, West Virginia — the list goes on. The midwest region is by far my favorite in the bracket this year and has some of my favorite picks for who might win the tournament. Along with the midwest, I also really like Michigan and Alabama coming out of the east and Baylor is the only team that sticks out in my mind in the south division.

Upsets: If you’re looking for an upset, look no further than the classic 12-5 upset with Villanova and Winthrop. Don’t sleep on the 12-seeded Eagles. Winthrop is 23-1 on the season coming into the tournament and is currently on a seven-game winning streak coming into the game with ‘Nova. Another upset I like is Eastern Washington over Kansas. With Kansas dealing with COVID-19 issues and the fact that the team has not looked like themselves this season, don’t be surprised if Eastern Washington steals one from the Jayhawks.

Cinderellas: My biggest Cinderella story team this year is Colgate. The Raiders are currently on a 13-game win streak and are led by the senior Patriot Player of the Year Jordan Burns who currently averages 17 points-per-game and averaged 15 points-per-game for the past three seasons. I can see Colgate getting to the Sweet 16 with the path it will play through, although it will be difficult to get past a stingy Ohio State team.

Champion: In case you have been living under a rock, Brad Underwood’s Illinois team is the hottest team in college basketball right now. I love this team, I love how they play, I love the path of games in the tournament and I love Illinois over Gonzaga in the championship this season.

Wondering what to do with the $1 million Warren Buffett will hand me for my perfect bracket is a stress I experience every year. I dream of Teslas and Starbucks cake pops up until the fourth or fifth game of the opening weekend, when a mid-major takes down my national champion. But I believe this is the year that I will be swimming in gold coins like Scrooge McDuck.

Favorites: Baylor has a favored path to the Elite Eight where it will likely match up against a solid Ohio State team. From there, anything is possible. Watching what Texas did in the Big 12 Conference Tournament makes it hard to believe the team will fall before the second weekend. A match-up with SEC tournament-winner Alabama would be an incredible watch.

Upsets: Naismith-winner Luka Garza and his Iowa Hawkeyes have shown serious troubles when facing good teams. Don’t be surprised if they get upset early on. A COVID-19 plagued season hasn’t given Iowa very many games, but if a 15-seed is going to win a game this year, don’t count out Rick Pitino.

Cinderellas: LSU, who took Alabama to the final buzzer in the SEC championship game, has that spunk you look for in a Cinderella story. A pretty easy top-half of the East region could give us a possible rematch between LSU and Alabama in the Elite Eight. To go along with my upsets, Oregon, winner of the Pac-12, could give Iowa troubles as a 7-seed and then get past a Kansas team that isn’t its typical dominant self.

Champion: Illinois is playing the best basketball in the country in the best conference in the country. The Fighting Illini, winner of seven straight, ran through the Big 10 tournament, which sent nine teams to the Big Dance. All-Americans Ayo Dosunmu and Kofi Cockburn have a fun matchup with Oklahoma State in the Sweet 16, but after that, have the best shot at winning it all.

I’m really excited about the NCAA Tournament this year. It is a tournament unlike any other with every game taking place in Indianapolis, Indiana, in a bubble. This is my favorite time of the year with high-level basketball games on all day.

Favorites: Tournament favorites for me this year are Gonzaga and Illinois. Gonzaga finished the regular season at 26-0 and is the top-ranked team according to KenPom and is the No. 1 overall seed in the tournament. Illinois is the No. 3 ranked team and I don’t think any team ended on a higher note than the Illini, finishing the season on a seven-game win streak, including five wins over ranked teams.

Upsets: Two big upsets that I think could happen are Winthrop beating Villanova and Ohio beating Virginia. Winthrop ended the season 23-1 and looked dominant to end the season. Villanova will also be without star guard Collin Gillespie in the NCAA tournament because of a torn MCL. Ohio is a fun team to watch, led by junior guard Jason Preston. I think Ohio can upset Virginia because of Virginia’s inconsistent offense.

Cinderella: Winthrop is my potential Cinderella this year and I think the team could go on a Sweet 16 run. The Eagles are a top 50 offensive team and are top 20 in defensive rating. I think the team matches up really well with Villanova in the first round and matches up well with either Purdue or North Texas in the second round. Balance is key for the Eagles as they have four players averaging 10 points or more and eight players averaging five points or more.

Champion: My champion pick is Gonzaga defeating Illinois. I think Gonzaga has too much offensive firepower and will take the crown. Since the KenPom era started in 2002, only one National Champion has not been top 20 in adjusted offensive efficiency and defensive efficiency. There are only four of those teams this year: Gonzaga, Illinois, Michigan and Houston.

‘There’s nothing like playing in the NCAA Tournament’: Women’s basketball season ends in Round of 32 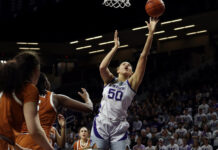