After finishing third in Big 12 Conference play this past fall, the Kansas State volleyball team was still looking for a signature win — a resume-building win for its NCAA tournament case.

That opportunity arose on Saturday against nationally ranked, No. 24 Creighton. The Bluejays came into the match with the eleventh-best RPI as well.

Head coach Suzie Fritz felt like the win could be the start of something special moving forward for the program.

“I think that’s a big win for us, we’re thrilled both in terms of outcome and productivity,” Fritz said. “That’s a really good volleyball team … That’s a really big block to deal with, and to hit .392, is a good start for us. We have felt up to this point in the spring, we just haven’t got our stride. That [match] could be the start of somewhere special, I feel like we’re on the right trajectory now.”

The Wildcats started the match on fire, rolling to a 10-point win in the match’s first set. K-State outhit the Bluejays .500 to .241 and had three services aces in the set alone. Serving was a big advantage throughout the entire night for K-State.

“I thought our serving was tremendous,” Fritz said. “ We were able to be disruptive with our serving and really limit their options.”

Redshirt junior Megan Vernon agreed with her coach, echoing that the team’s serving paved the way for success throughout the match. She felt like it helped keep the whole team involved, as well as helping out the team’s blocking ability.

“I think the servers did a great job keeping them out of system, it really helps the block,” Vernon said. “It felt great, it felt like everyone on the court was really connected. We all contributed to that win so it felt really good.”

Another reason for the team’s success throughout the season was freshman Aliyah Carter’s play, and that was no different on Saturday. The star freshman displayed another all-around game, finishing with 26 kills on .449 hitting. She also added nine digs in the back row.

Carter credited her teammates after the match.

“The main thing that really helped me getting a good hitting percentage is that my teammates always do a good job covering me,” Carter said. “I love seeing my teammates getting kills. The energy on the court is so much better. It’s not just one individual person, we’re spread out. We’re doing a good job of that.”

Fritz is pleased with Carter’s all-around evolution as a player from the start of the fall season to now.

“I think the thing I am most pleased with is how Aliyah’s all-around game is coming along,” Fritz said. “This spring, we have started to ask more of her, as in her responsibilities … In her case, every time she has an opportunity to grow, we see her evolving as a volleyball player.”

But Carter knows work still has to be done. The Wildcats still sit on the NCAA tournament bubble even with the team’s first ranked win since 2018. K-State’s No. 107 ranked RPI may not be enough to sneak in, but the freshman was just focused on the match at hand.

“Every game is a big game from now on and we want to win every game,” Carter said. “We went into it saying we are going to play our hardest and see what happens.”

K-State brings its overall record to 12-7 after the victory. Next up for the Wildcats is two exhibition matches with NCAA Division-II’s Wayne State next weekend inside Bramlage Coliseum, with Saturday’s match starting at 4 p.m. 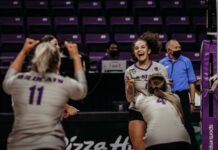 Countdown to Kickoff: 91 days away with defensive end Felix Anudike