“What that looks like is that as a Big, you’re matched with your Little, just on a one-on-one situation,” Sink said. “It’s just kind of helping the [Littles] with life skills, whether it’s making dinner, and hanging out, and just talking and having somebody that’s special in their life that they know cares about them and encourages them, and to help them go on and have a better life.”

Easton Attwood, junior in kinesiology and integrative psychology, has been a Big since last fall.

“I have absolutely loved the experience,” Attwood said. “Some things we both enjoy doing are disc golfing, playing board games and eating cookies.”

Attwood said being able to have such a strong influence on a young person really has been something special. He hopes that his Little will learn not to take things so seriously and that it’s okay to make mistakes and put himself out there.

Sink said Trivia for Kids’ Sake is this year’s alternative fundraiser to Bowl for Kids’ Sake. She said all BBBS communities in Kansas are doing their “For Kids’ Sake” differently this year.

“With [COVID-19], when we were planning everything, we didn’t know whether being able to go bowling would be a thing,” Sink said. “So we kind of brainstormed, we rolled out a bunch of different ideas, and Trivia for Kids’ Sake is what we came up with for our community.”

The event will take place at Rockin’ K’s on April 13 and 20. There are options for four-player teams to participate in the 3 p.m. or 5:30 p.m. trivia challenges. Each team member will receive a T-shirt, an appetizer from Rockin’ K’s and a drink ticket.

Fundraisers for Big Brother Big Sister, such as Trivia for Kids’ Sake, help facilitate matches, which cost about $1,500 for the first year, Sink said. This includes 12-15 hours of interviews and background checks for each volunteer to become a Big, as well as interviews for the Littles and families and meetings with their match support specialists.

“Events like Trivia for Kids’ Sake are awesome because they create more awareness about BBBS,” Attwood said. “The program they have set up is for such a good cause, so it would be great if they were able to get some more Bigs through this event.”

The organization also hosted a Greek life Trivia for Kids’ Sake in March and the top five teams from that event will participate in the Sunflower Throwdown against the University of Kansas on April 27.

Owen Fay, junior in finance, has been involved with Big Brothers Big Sisters over the past year with his role as the director of community service and philanthropy at Delta Upsilon. He currently serves as a student board for BBBS to help with fundraising.

Fay said having a long relationship with fraternity extracurricular community service has allowed him to help with some of BBBS’s event planning, including Trivia for Kids’ Sake.

“Everyone that is [a Big] loves it, so we’re always just encouraging people to do it,” Fay said.

While Fay isn’t a Big yet, he looks forward to becoming one next year.

“I think it’s a really cool opportunity, really, what that organization does,” Fay said. “I think for people in their 20s to kind of have that impact on people’s lives, to see what they’re doing for other people and for kids at such a young age, I think is a really important thing to develop, especially at this age.”

Attwood said he recommends becoming a Big to anyone who is looking into it, especially if you are a guy.

“There are so many boys in the community who have been waiting for so long to be matched,” Attwood said. “It is something that you will not regret.”

People who are unable to participate in Trivia for Kids’ Sake and would still like to donate to the organization can do so on the Kansas BBBS website. 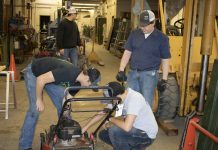 No job too big: Club repairs lawnmowers for annual fundraiser 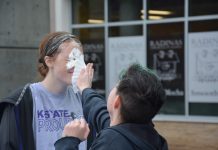