Rallying behind sports teams with a flare of purple pride, fans dance and clap to Kansas State’s iconic “Wabash Cannonball” at every game. The K-State Marching Band forms the heart of these celebrations and brings a sense of family and community to K-State.

Long has the band played an integral part in K-State culture, but the organization has struggled financially in the past and still does today. Caleb Niehoff, sophomore in music education and trumpet in the band, recently tweeted a Collegian article from 1991 reporting on the band needing financial assistance, and he urged people to understand the band still has funding challenges.

“The band program has had a history of budgetary issues for as long as I can remember,” band director Frank Tracz said. “It was far worse ‘back in the day’, [the] 70’s and 80’s.”

Band members put on many fundraisers to afford meals for game days, instrument repairs and instrument supplies. For example, over 400 bell covers needed purchasing this year, and fundraising supported that.

“I would not say the lack of funding affects me directly, but it does affect the program,” Hannah Seck, senior in hospitality management and clarinet in the band, said. “It’s hard knowing that if something were to happen to my school instrument it’s going take money away from something else that needs to be paid for, or possibly make them have to cut back on third [or fourth] year’s scholarships. … We are one of the only Big 12 schools to only have two band directors because we cannot afford to hire a third.”

The band program, including marching, pep and concert ensembles, is funded entirely by K-State Athletics. They support the organization to purchase uniforms, fund staffing, traveling and more.

“Athletics has been extremely supportive financially to the band program,” Tracz said. “If we did not receive this funding from athletics, the entire band program would not exist.”

Even though budget cuts take a toll on the band program, members said they still enjoy playing and performing. The quality or quantity of things they receive is not as important to them as the experience of being a part of KSUMB and all their spirit does for the university.

“We are there because we want to make music, show our school pride and show off our awesome horn moves with 400 of our closest friends,” Seck said. “We work our butts off to fundraise for what we have, and even though it’s hard knowing that the program is struggling, we always show up with our best attitudes and we’re ready to give our best performance.”

The 400 members of KSUMB spend hours every week rehearsing, sometimes in the All Faiths Chapel that “is too small for us” and commit hours on game days as well, Seck said, but the dedication amounts to lasting memories and friendships.

“It can be a lot of hard work at times, but we still choose to participate in band because we love it, and a large portion of us don’t even enroll in marching band for credit,” Niehoff said. “We just love playing and seeing how much our presence in Bill Snyder Family Stadium affects not just the crowd but the team as well.” 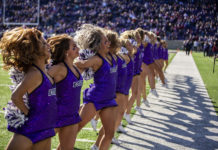