The Kansas State baseball team bounced back from an 11-inning Friday night loss to West Virginia by winning 5-2 on Saturday and 9-4 on Sunday afternoon. The Wildcats moved to 23-16 and 6-9 in Big 12 play this season with the series victory.

“I forgot all about Friday night,” head coach Pete Hughes said. “You get very few opportunities. It’s so hard to sweep somebody. … As frustrated as I am with our Friday performance, I am unbelievably proud of our guys, how resilient they are. You could have gone south really quick after losing with your best pitcher.”

The difference on Saturday was a three-run shot by junior first baseman Terrence Spurlin to put K-State up 4-0 in the fourth. A wild pitch scored junior second baseman Kamron Willman to add another insurance run in that inning, but K-State did not need it.

The Mountaineers managed a run on a sacrifice fly in the sixth and a wild pitch in the ninth but could not get enough going to get out of their hole.

Freshman pitcher Connor McCullough moved to 3-2 on the year after giving K-State seven innings of one-run baseball in front of 865 fans.

Things were a bit more back-and-forth on Sunday when the Mountaineers jumped on sophomore starter Carson Seymour for one run in the first.

The Wildcats got the run back in the bottom of the first, but when Seymour continued to struggle and gave up two more in the third, he was replaced by senior Kasey Ford after just 2 2/3 innings. Seymour was in line for the loss until K-State’s offense gave him a boost.

Ford gave K-State 6 1/3 innings of one-run baseball to hold down the Mountaineers and give his team a chance to win.

“For me the storyline of the game is Kasey Ford coming in and just being ready to execute,” Hughes said. “The kid’s been ready every single day for three years. … The only thing he cares about is the purple and white winning baseball games.”

A two-run home run by Willman into left-center tied the game at three runs, but the Mountaineers got back on top when Hudson Byorick trotted in on a wild pitch by Ford.

“We know as a ball club we’re never out of a game, no matter what,” Willman said. “We’re just gonna put our heads down a keep working, that’s the kind of ballclub we are.”

Willman put a groundball between the right-side infielders to tie the game back up with two outs in the sixth and then junior catcher Dylan Caplinger floated one over the second baseman to score another run and take a lead for good.

The second-baseman finished the game 2-4 with a home run and a single and three RBIs.

“It’s good to some days rely on that home run ball to help us get over the hump. But like I said this is just a really good ball club and we can win any type of way that we need to,” Willman said.

Ford allowed just one baserunner in the last four innings to help secure the win while his offense was busy picking him up. He moved to 3-0 on the season.

K-State will take on former Big 12-foe Missouri in Manhattan in a one-off game Tuesday night before turning their attention to a weekend series with Texas Southern.

Countdown to Kickoff: 91 days away with defensive end Felix Anudike 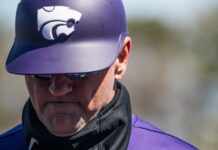