That is not the only way into the league, though.

Hubert drafted to the Cincinnati Bengals in 2021 NFL Draft

Four former K-State players signed undrafted free agent agreements with NFL teams and will get a shot to make their respective teams at summer camps in July.

Former Wildcat defensive back AJ Parker signed with the Detroit Lions. Parker contributed at K-State his whole career after redshirting in 2016. He started four games as a freshman and made 33 total starts at K-State.

In last years abbreviated season, Parker had the sixth most tackles on the team and had an interception return for a touchdown.

Moore was an impact player in his one season at K-State. He had 22 catches for 338 yards — both second on the team — and three touchdowns for the Wildcats and received votes for Big 12 Offensive Newcomer of the Year.

Former linebacker Elijah Sullivan will head to San Francisco to join the 49ers. The Tucker, Georgia, native spent a sixth season in Manhattan after receiving a medical hardship waiver for the injury that knocked him out of the 2018 season. He’ll join former Wildcat Jordan Willis in San Fransico.

Sullivan was the 2019 Liberty Bowl Defensive MVP and was honorable mention on the 2020 All-Big 12 team.

Defensive back Kiondre Thomas, who grad transferred in from Minnesota last season, will join former Wildcats Elijah Lee and Matt McCrane with the Cleveland Browns.

He started the last four games of last year’s season.

NFL teams are free to consider signing as many undrafted free agents as they want as they continue through the offseason, meaning there are still chances for K-State to place more players on NFL rosters. Most sign immediately after the draft. 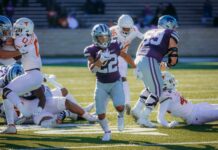 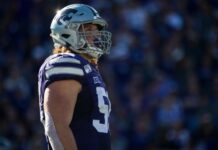 Hubert drafted to the Cincinnati Bengals in 2021 NFL Draft