Garcia played basketball for the Buccaneers during high school, with his father Renaldo Garcia as head coach.

Like his son, Renaldo is no stranger to collegiate sports. The elder Garcia started three seasons for the Florida basketball team from 1987 to 1991. He helped the Gators win their first SEC Championship in 1989 before playing professionally in Honduras.

Out of high school, RJ Garcia was rated a three-star athlete by 247Sports, was the 139th best player in Florida and the 148th best receiver in the nation.

Garcia ultimately committed to K-State, making his decision public through his Twitter on May 29, 2020.

Garcia officially signed with K-State at his high school on Dec. 16 later that year.

Congrats 🎉 @RJGARCIA_1_ @jodi_garcia1 @RenaldoMGarcia A Top Tier Family That Represents What Family Is All About! No Handouts Just Hard Work Dedication & Unconditional Love! @KStateFB U Didn’t Just Get One Hell Of A Football Player U Just Got One Hell Of A Family! @BPS_Football pic.twitter.com/C4pgkW9BuB

Garcia looks to impact the receiving game and special teams game with his explosive ability mentioned by multiple players and coaches on K-State’s staff.

More praise for freshman WR RJ Garcia today. Both Skylar Thompson and Van Malone have gone out of their way to mention him.

Hoffler comes to K-State from Woodward Academy, where he played under head coach John Hunt. He finished his high school career with 115 total tackles, 21 tackles-for-loss and 17 sacks.

Out of high school, Hoffler was rated a three-star athlete from 247Sports, was the 68th best edge defensive end in the nation and the 114th best player in Georgia.

Hoffler committed to K-State and made his decision public through Twitter on Aug. 24, 2020.

Hoffler looks to leave his mark on the program in the coming years. However, it might take time before he sees the field, with defensive ends Bronson Massie, Khalid Duke and Felix Anudike sitting as veteran players on the depth chart. 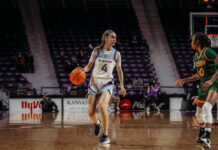