The Marianna Kistler Beach Museum of Art welcomed a new installation to its building on Sept. 21. Artist and photographer David Lebrun of Los Angeles created a video animation called 45 Paleolithic Handaxes from Transfigurations: Reanimating the Past, using photographs of Paleolithic handaxes from museums in France that uniquely shows the objects.

Lebrun said he and his team took hundreds of photographs of Paleolithic handaxes at museums in France. He then put them into a sequence based on likeness and used computer technology to achieve the morphing technique as one handaxe changes into another.

“They become as like something alive and breathing,” Lebrun said. “Changing and evolving, changing in shape over time.”

A computer outside of the installation called the Exploration Station provides further information on what visitors are looking at, including who made the tools and where they were created. It also gives information about the larger project, Transfigurations: Reanimating the Past.

Linda Duke, director of the Beach art museum, said the original plan was to show the entire Transfigurations project in six different alcoves. However, she said the pandemic made that impossible. She recalls making the decision to cancel the original show and breaking the news to Lebrun.

“When the pandemic came, at first, I don’t think any of us quite realized how long it was going to be or how bad it was going to be,” Duke said. “But gradually it sunk in for me that we were not going to put this kind of effort and try to raise the money we would need for the technology to do something when maybe the museum wouldn’t even get to open or that it would get shut down halfway through. … And so, it was very difficult for me to make that call to David and tell him.”

Despite the decision, Duke said a new idea emerged to show Lebrun’s work at the museum.

“As we grappled with that disappointment, what we decided to do was that when the museum could reopen, on a smaller scale we would show one of the animations,” Duke said. “And it’s still a premiere. I mean, it’s never been seen like this in public.”

“When I talked with the Cytek folks about this … they wanted to help,” Duke said, “So when it came time to set up this installation, they gifted us all of the strategies. They sent a team of three guys over here that spent two days running wires through the ceilings. They donated all of the cabling and connections. … They were our constant advisers on what to buy and then how to set it up and make it work.”

Lebrun collaborated with his own team of advisers when they worked on the larger Transfigurations project in 2009 with a trip to France in 2011 to take the photographs now showing in the Beach art museum.

“One of the things that we do in this project is we work with an advisory board of archeologists, scholars and museum people,” Lebrun said.

This includes archeologist of the Paleolithic, Roberto Ontañón-Peredo, the director of the Museum of Prehistory and Archeology of Cantabria in Spain.

As Lebrun began photographing the handaxes and putting them in the animation, he said he had a revelation.

“What became really clear to me in doing this animation was that at least some of these were works of art, they weren’t just tools,” Lebrun said. “They were objects of great beauty and power, and made to be that.”

Duke said she hopes visitors have a similar encounter with these objects, which is different than they might have at a history museum where there are labels filled with information about them.

Lebrun said he believes the technology used for the animation makes the artwork and aesthetics of the pieces truly shine. An 84-inch 4K screen in the middle of the installation is accompanied by two smaller screens on either side of it that shows each object in actual size.

“I feel like it’s like you’re looking into a landscape,” Lebrun said. “It’s like looking into the desert from the air or landscape forms — you really immerse yourself in it.”

“It looked otherworldly when [the handaxes] changed into the next one,” Scott said. “They didn’t look like stone tools.”

That type of aesthetic experience is what Lebrun said he hopes his work gives to viewers.

“I try to disappear, as it were, and give the viewer as direct a relationship as possible with the ancient objects,” Lebrun said. “So, I work very hard to make every transition in the work seem as natural and organic as possible, not to call attention to my own interventions.”

More information about the installation and upcoming events at the Beach art museum is available on the museum’s website. 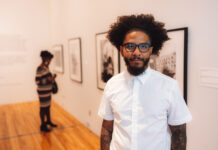