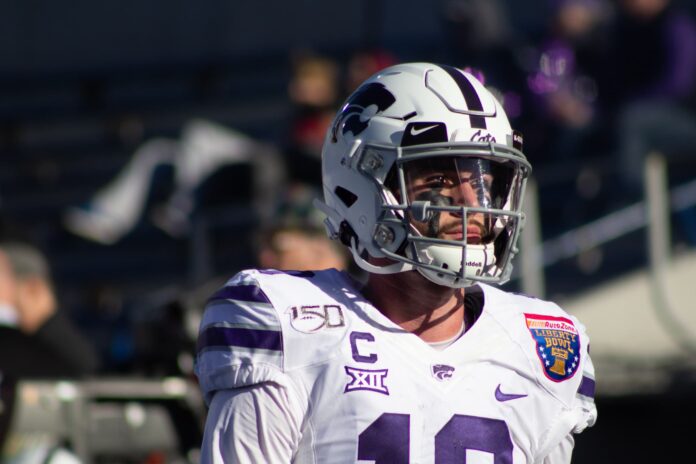 During the weekly football press conference, head coach Chris Klieman shared that quarterback Skylar Thompson is “not likely” to play this Saturday against No. 4 Oklahoma.

“[Thompson’s] doing more things,” Klieman said. “Maybe late in the week we’ll have a better understanding, but right now I would say no. It’s going to be Will [Howard] and Jaren [Lewis]. Our hope all along was the open week getting him a chance to be back for Iowa State. That’s kind of the timetable. I don’t think that’ll change.”

Fans were hopeful that Thompson would return to the field against Oklahoma after his injury in week two, but that seems unlikely for now. With an injury to back-up Will Howard, that could open a door of possibilities for a couple quarterbacks we have yet to see this year.

“Coming into this week, now we’ll get Jake [Rubley] and Max Marsh more reps and ready to play, because I don’t know about Will. Skylar is doubtful, so who’s the next guy coming in? I couldn’t tell you who that would be,” Klieman said.

Looking ahead to the weekend against a good Oklahoma team, Klieman said he knows the Sooners are aware K-State has upset them in the previous two meetings.

Klieman shared the importance of the home environment going into a big matchup, saying that it is “huge” to play in front of a familiar crowd.

“This is going to be a great environment. We’re excited to play at home again,” Klieman said. “Our guys love running out of the tunnel and seeing the crowd with the band and the students. We need everybody to come back out because I think we have a really good football team.”

Sophomore defensive end Felix Anudike-Uzomah didn’t want to put Oklahoma on as high of a pedestal as everyone else has been putting them on.

“They are humans. They are literally just like us,” Anudike-Uzomah said. “We don’t treat them like they are superior or the beast of the nation. We are just going to attack like we attack everybody. Go based on our rules and principles and just play our game.”

Senior linebacker Ryan Henington also said the game is more about worrying about themselves rather than their opponent.

“I think, first and foremost, it is just about us and controlling what we can control,” Henington said. “Like last year and the year before, when we go out there and execute our game plan and stick to our keys and core principles, I think we will be alright.”

Saturday’s contest will be K-State’s conference home-opener at Bill Snyder Family Stadium in Manhattan. Kickoff is set for 2:30 p.m. and can be seen on FOX or heard on Wildcat 91.9.