With steel beams rising from the ground at the intersection of Denison and Anderson, St. Isidore’s Catholic Student Center is amid a three-part, $14 million upgrade project. Father Gale Hammerschmidt, St. Isidore’s chaplain, said the project stems from the need to properly serve the growing Catholic community in Manhattan.

“When I arrived, and really for a decade or two prior to my arrival, on Sunday mornings we would have the former church fill, and then we would have to send people into spill-over sections within the student center itself, and they would be watching Mass on a screen,” Hammerschmidt said. “It just wasn’t big enough.”

After beginning his service as the chaplain in 2017, Hammerschmidt said it became clear to him and the parish that a larger church was needed.

“My first day here was July 1 of 2017, and by November of 2017, we’d already met our current architect,” Hammerschmidt said. “There were a lot of people getting pretty excited about the project.”

That excitement led to the practical need for funding the project.

“Throughout most of 2019, we held a pretty large capital campaign where we went out to our donors throughout the state of Kansas and beyond, a lot of Kansas State graduates, people who had come to St. Isidore’s when they were here at Kansas State,” Hammerschmidt said.

Nearly $14 million was raised during the campaign and was combined with money previously saved as funding for the project.

The project consists of three parts. The first is a new kitchen and other added space and is already complete. The second is the student center renovation, which will open on Oct. 18, 2021, and the third is the new church scheduled to open around Christmas of 2022.

Witnessing the transformation of St. Isidore’s is something that Adrie Nordhus, sophomore in psychology, said she cherishes about her time at K-State.

“As a sophomore, I feel very blessed at coming in as a freshman, getting to see the church before it was torn down and the student center before it was renovated,” Nordhus said. “So, it’s fun that my junior year the church will be done. I get to see the progression, and I get to encounter both the old and the new and get to appreciate what it was and what it’s to become.”

Hammerschmidt said the renovation of the student center would make it more inviting for students. Previously, the basement was only accessible from a stairwell in the rear of the building. There were also no windows in the limestone walls along Denison Avenue for people to look into.

“Much of the redesign is to put in larger windows to make sure people can see where the basement is located,” Hammerschmidt said. “We’ll now have a balcony where people can spend time lounging or studying on nice days.”

Hammerschmidt said another change that will help make the student center more inviting is moving offices from along the wall on Denison to the rear of the building. This will ensure the lounge and study space can be seen from outside as K-State students walk by.

“Maybe their friends can see them as they’re walking down the sidewalk and run out and holler at them, just say, ‘Hey,’ and strike up a conversation,” Hammerschmidt said. “So, just making it more inviting.”

The inviting aspect of the new building is one of the things Kelsey Doll, senior in pre-occupational therapy, said she anticipates.

“I think that students will be intrigued by the new building that is going up,” Doll said. “But also, just the community that’s already built will make it a home right away and constantly invite others into it, which is exciting.”

Doll also said the new student center would provide a space for people to build relationships.

“I’m most excited about the look that it’s going to be,” Doll said. “I know that it will attract so many faces, both new and old, but also, just the space for us to enjoy all of the faces that do come around.”

On top of making St. Isidore’s larger and more welcoming for students, Hammerschmidt said the parish wanted to ensure the building fits with K-State’s campus.

“We were very adamant that we wanted this to look like it’s a church that belongs at Kansas State,” Hammerschmidt said. “That’s why you see so much limestone. We were willing to spend the money to make it as beautiful as those buildings on campus.”

St. Isidore’s desire to construct a building well-suited to K-State’s campus results from a strong relationship between the two, Hammerschmidt said.

As the project continues, Hammerschmidt said prayers and donations for St. Isidore’s are greatly appreciated. He also hopes students of all backgrounds visit the new student center.

“After the 18th, stop on by and get a tour,” Hammerschmidt said. “We’ll have students to give tours to show them around. Anybody’s welcome to come and study. We’re more than happy to have people, Catholic or not, hanging out here at St. Isidore’s.”

To learn more about St. Isidore’s Catholic Student Center and possible donation opportunities for the project, visit their website at stisidores.com. 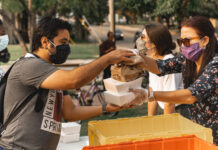 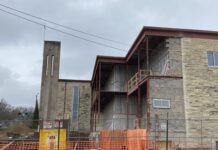