On the first day of the competition, Dekkers won the first set in a close match (7-5) before falling 6-1 to Alisha Reayer in set two. While set three was hard-fought, Dekkers still fell 10-5.

“She competed well for her first match in a tournament like this,” head coach Jordan Smith said to K-State Sports. “It was good to see her do well in the first set. The focus shifted in the second set and we came up a bit short in the tiebreaker. She built from last weekend and I’m excited to see her grow as we get ready for Iowa City.”

Werremeyer named Big 12 Goalkeeper of the Week, soccer prepares for trip to Oklahoma

“Our biggest goal for our team this fall is to get plenty of matches,” Smith said to K-State Sports. “Adding this tournament late was a good way to keep on track with the goals. I’ve been very pleased with our progress so far this fall. We’ve been tough in all of our matches and picking up good wins on the way. I’m excited for Anna, KJ and Dinara to have a good showing down at SMU.”

Opponents for the weekend included Baylor, Kansas and Texas Tech. The tournament started at 9 a.m. with a doubles match — Job and Turco vs. Olivia Malm and Ana Carmen Zamburek from Baylor.

On the second day of the competition, freshman Alloyarova teamed up with Texas Tech’s Camryn Stepp to defeat Paulina Engback and Sumomo Hamanaga from Central Arkansas. The team of Alloyarova and Stepp went on to defeat Tyler Junior College’s Patricia Apisah and Abigail Wild.

Job and Turco fell 6-1 against Baylor’s Malm and Zamburek.

On the third day of the competition, Job and Turco beat Central Arkansas’ Fuka Nonoyama and Xin. Alloyarova and Stepp — who teamed up on day one — defeated Tyler Junior College’s Patricia Apisah and Abigail Wild. Job had a two-set victory over SMU’s Lexi Keberle, and Alloyarova had the team’s fourth victory of the day against Nonoyama in the semifinals.

K-State finished day three with two singles wins. In the Mustang Draw, Job was victorious over Avelina Sayfetdinova — a major victory over a Big 12 opponent. Turco got a two-set victory over Jaeun Lee.

The next competition for the Wildcats is the Intercollegiate Tennis Association (ITA) Regionals in Iowa City, Iowa, on Oct. 21 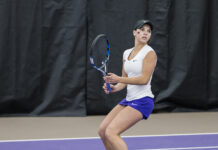