The Kansas State soccer team traveled to the Sooner State this past week to take on Big 12 foes Oklahoma State and Oklahoma.

Oklahoma State came close to scoring the first goal in the 44th minute when Kim Rodriguez blasted a shot from outside the 18-yard box. The ball passed through the legs of sophomore goalkeeper Alaina Werremeyer, but defender Aliyah El-Naggar slid along the goal line to prevent OSU from taking the lead before the half.

K-State had multiple opportunities in the second half, but, ultimately Oklahoma State scored the game-winning goal in the 75th minute. The Cowgirls won a scrap in front of the K-State goal and OSU’s Ally Jackson put in in the back of the net to give the Cowgirls a 1-0 lead.

OSU made a K-State comeback even harder in the 83rd minute when Olyvia Dowell doubled the scoring for the Cowgirls with a shot that bounced off the crossbar and into the K-State goal.

“At this level and in this conference, the margin for errors is so, so tight,” K-State head coach Mike Dibbini said to K-State Athletics. “There’s no room for error. And we experienced that a little bit today. I think the counter-attack was better for us in the second half. We made some adjustments and had a player higher up the field, but wasn’t enough to generate a goal.”

The Sooners took an early lead in the first half when a bad K-State pass gave Oklahoma possession deep in Wildcat territory. Alexis Strickland found a loose ball after a fellow Sooner shot and put the ball away to give Oklahoma an early 1-0 lead.

Coach Dibbini changed up the formation in the second half, electing to go with a 4-4-2 look in an attempt to put more pressure on the Oklahoma defense.

The change worked almost instantly when, 33 seconds into the second half, sophomore Caylee Thornhill found junior Kyler Goins on an early run. Goins ran past the Oklahoma defense and was 1-on-1 with the Sooner goalkeeper, who was 30 yards off her line. Goins juked the goalkeeper and tied the game up 1-1 for the Wildcats.

Oklahoma responded three minutes later in the 49th minute when they stole another possession deep in K-State territory. Bri Amos took a shot just outside the 18-yard box that sailed towards the right post and into the back of the K-State goal to give Oklahoma the game-winning goal.

“We had a lot of opportunities to win this game, we just didn’t get them to go in, but we played well enough to win,” Dibbini said to K-State Athletics. “The margin of error in a match like this on the road on a Sunday is so small. We need to stay focused because of that in some areas.”

K-State will look to right the ship when the team travels to Fort Worth, Texas, to play No. 11 TCU in the final road game of the 2021 season on Friday, Oct. 22. 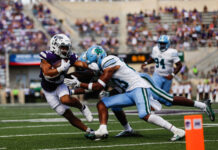 Soccer has record-breaking day in victory against Austin Peay