Within the College of Health and Human Sciences lies a niche field of study: gerontology, the study of the aging process. With 123 undergraduate students, the Center on Aging focuses on educating students in the field of gerontology.

Bryce Brown, senior in life sciences and a student ambassador for the Center on Aging, said as a pre-med student, she felt it was necessary to take the introductory course.

“I just thought, ‘I’ll take this intro class,’ because everyone ages, there will never be a time when people aren’t aging,” Brown said. “It really sparked my interest in how the body ages and also a lot of the policies surrounding the geriatric community.”

Now, Brown said she believes all students should take the Introduction to Gerontology course.

“Gerontology is something that can be utilized by everyone,” Brown said. “There’s no reason why you shouldn’t at least take the intro class, and if it’s not for you, it’s not for you. But there’s a chance that it could really help in any career field.”

Anika Roy, junior in nutritional health, said she found that when she mentioned studying gerontology, she received mixed feedback.

Students can enroll in an undergraduate secondary major or minor, a program Yelland said can complement any primary major.

“Just because you think you are going to work with a certain audience doesn’t mean that you’re exempt from working with older adults,” Yelland said. “I’ve talked to students and they say, ‘Aging doesn’t apply to what I’m doing,’ And I say, ‘What’s your major?’ and then I can tell them how it connects.”

The Center on Aging isn’t just focused on academic programs. Research opportunities and community outreach events are available to students as well. Yelland said she wants students to know there are a variety of ways to be involved.

“We have undergraduate students and graduate students from a whole variety of degree programs and majors, and departments, that are engaged in research with the Center on Aging,” Yelland said. “Ranging from doing or helping to implement surveys, all the way to helping to write journal articles and analyze complex data.”

Yelland and her colleagues plan to share information about the Center on Aging at an open house. Students who attend can write and sign greeting cards for senior residents at the Meadowlark Hills retirement community, talk to faculty members of the gerontology department and enjoy cider doughnuts. Yelland encourages students to stop by 253 Justin Hall to explore the program and what they offer.

“I feel like we are one of the best-kept secrets at K-State, and we no longer want to be that secret,” Yelland said. “We hope people can come and meet us, and just mix and mingle, learn about gerontology programs or research related to aging.”

K-State, Manhattan offers many weekend activities for under-21 students 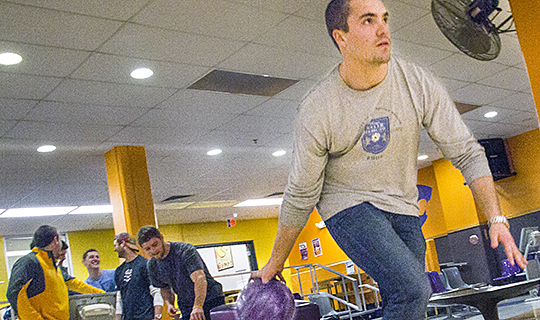 K-State, Manhattan offers many weekend activities for under-21 students