The interview process started after applications were due on Oct. 6, and the applicants went through two different panels of judges during the weeks leading up to Homecoming Week. During homecoming traditions Pant The Chant and Wildcat Request Live, the top-3 applicants were given on-the-spot interview questions to answer in front of K-State students.

“I think the idea of giving an answer on the spot is kind of stressful, but when you actually listen to the question, it’s more like you’re talking to a friend and telling them about your experience here,” Mendoza said. “It’s all based on personal experiences, so you can’t really answer the question wrong, and it definitely seems very intimidating, but that’s what our jobs are going to be. People are going to be asking us this stuff, and we’re not going to necessarily have any preparation at all, and we’re going to have to answer on behalf of the university, so I think it was great preparation of what the role is going to look like.”

Events have already started to pop up on the calendar for the two to take part in, making K-State representation more of a reality.

“When I think of representing K-State, that is a huge responsibility,” Diazdeleon said. “Having the opportunity to be able to reflect on what student life is like here at K-State and being that we’re in a position that we’re able to speak to alumni, the folks who have helped establish what the state of our university is in today, and having the opportunity to talk to folks who will be hereafter our time as well is really important.”

Both ambassadors are in their third year of college and said the feeling of family on campus has set in more now given their new roles.

“My family has been [football] season ticket holders for about 25 years, so I have gone to every single Homecoming game where they announce the ambassadors,” Mendoza said. “So I’ve grown up seeing those leaders get recognized and have always looked up to them. Even coming to K-State, that was something that I always thought was really cool.”

The family aspect of the university is something some students and alumni hold very high — something that is looked for in student ambassador consideration.

“I asked myself, ‘What would I like that person to look like? How would I like that person to act and carry themselves?’ and then I looked at myself to see if I had any of those characteristics and to see if I was capable enough to fulfill that position, and that’s why I decided to apply,” Diazdeleon said. “K-State has already done so much for me personally, and has helped me become the person who I am today, and so I thought this was a great opportunity to not only give back to the university but to also give back to all of the students who have also made me who I am today as well.”

Mendoza shared similar thoughts about her personal qualifications and what it means to represent the K-State community.

“Like Josh said, you ask yourself, ‘Am I qualified to do this?’ because these are people that I have looked up to for so long, and, ‘Is this something that I am prepared to do?’ and I think that I have experienced the support of the K-State family in ways that I could have never imagined,” Mendoza said. “It makes me even more confident and even more proud to be able to represent the K-State family … especially going to the university for three years now and getting to hear from all my friends that go to other schools. What we have here is really special, and it’s a huge honor to be somebody that gets to go out and share that with other people. … I think I really have this desire to share what we have here.”

Becoming a face for the university almost didn’t seem possible for Mendoza.

“I was planning on studying abroad, and this was not on my radar at all,” Mendoza said. “I thought, ‘This just isn’t going to happen during college,’ and that was totally OK with me because there are so many other ways to serve the university that aren’t through this role.”

The encouragement from past female student ambassador, Marissa Lux, was what encouraged Mendoza to go through with her application and start her journey to the position.

“I really wasn’t planning on doing it, and then I talked with Marissa the night before applications were due, and then I remembered why I thought the role was so important in the first place,” Mendoza said.

Diazdeleon said he also had not considered the position until this year when normal university life returned.

“I had always known about this position after becoming a student at K-State, but I think wanting to become an ambassador ties in with all of my experiences here,” Diazdeleon said. “So, the more that I become in-depth with what it means to be a Wildcat, the more I got the urge to want to fill this position.” 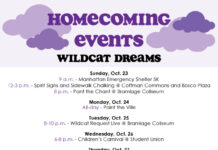 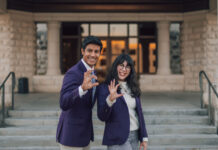