Construction is underway on three new Kansas State sports facilities thanks to the generosity of K-State donors, President Richard Myers said. The Morgan Family Arena for volleyball, the Football Indoor Facility and the Olympic Training Center should better equip K-State’s athletic department to train athletes from K-State and around the country.

On Dec. 8, the official groundbreaking for these facilities took place. The group on hand for the ceremony included donors, administration, athletes and representatives from GE Johnson — the construction company in charge of the projects.

During the ceremony, Myers thanked the donors for their support of the projects.

Gene Taylor, director of athletics at K-State, also spoke at the ceremony. He said these new facilities benefit more than just football and volleyball student-athletes.

“These projects that we will complete here by 2023 will have a positive impact on literally every one of our student-athletes in our department,” Taylor said.

One example of this impact is K-State’s track and field team as it will use the football practice facility upon the new facility’s completion, he said.

Cooper Beebe, junior in education and member of the K-State football team, also addressed the crowd gathered on the east side of Bill Snyder Family Stadium. He said the Football Indoor Facility would make K-State football more competitive.

“When I heard about the new indoor facility, I couldn’t be more emphatic,” Beebe said. “It’s going to give us a real competitive advantage across the Big 12 [Conference] and across the country.

Josh Jenson, Manhattan resident, said he agreed the new facilities are a positive addition for K-State.

“I think this is great for K-State,” Jenson said. “These facilities will make us on par with other schools in the Big 12 and across the country. Maybe even in a better position than most other schools.”

More information about the projects is on K-State Sports’ Building Champions website. 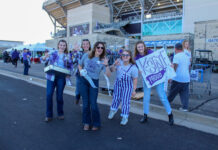 What to Watch: NFL Week 7