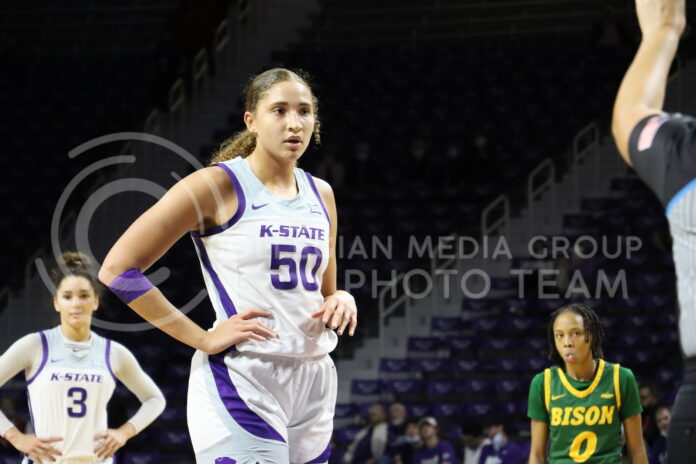 Kansas State women’s basketball (9-2, 0-0) was down to just seven available players coming into Frost Arena in Brookings, South Dakota, to play South Dakota State Saturday afternoon. The Wildcats survived in a 79-73 thriller in their first road win of the year.

Missing both Glenn sisters — freshmen Jaelyn and Brylee — and sophomore backup center Taylor Lauterbach, K-State was able to jump out to a huge lead early. The Wildcats took a 22-10 lead into the second quarter.

South Dakota State battled right back in the second period. Limiting K-State, the Jackrabbits settled into a 2-3 zone and shot 73 percent in the period to outscore the Wildcats 27-18, only trailing K-State by three at halftime.

K-State came out of the halftime locker room cold and immediately coughed up its lead, allowing the Jackrabbits to go on a 5-0 run to start the half. K-State got back to within one before SDSU started really hitting shots again.

The Jackrabbits started drilling threes and trying to force an already tired Ayoka Lee (junior) to cover both the paint and the free-throw line. K-State switched to a 2-3 zone to keep Lee down low and preserve some energy, but the threes kept falling.

They used that threat to get more open shots all over the court. The SDSU lead built out to eight points with two minutes left in the quarter.

A pair of clutch three-point shots from freshman Serena Sundell and a pair of late free throws from Lee put the Wildcats back within a score before the end of the third.

K-State battled back in the fourth quarter, tying it twice before finally putting the clamps on the Jackrabbit offense.

With five and a half minutes left, SDSU’s Haley Greer hit a three, but Sundell had a nearly immediate answer on the other end to tie it back up.

A couple of minutes later, Sundell jumped a pass and tried to go coast-to-coast for a transition layup, but it was blocked from behind. In the first of a couple of fortuitous bounces, the ball went out off SDSU. K-State was able to get the inbound and a layup for Lee to push the lead to four.

South Dakota State drove the lane with just inside a minute to play. The ball was knocked out of bounds, and, when the Jackrabbits tried to keep it in bounds, junior Emilee Ebert got a pair of hands on the ball, sending it straight up in the air. She jumped over a pair of Jackrabbits to bring it down and got a timeout before they could tie her up.

The possession-saving timeout from head coach Jeff Mittie also moved the inbound down to half court, but Sundell committed her only turnover of the game on the ensuing possession that led to a layup for SDSU to cut it to two.

The drama was not quite over in Brookings. Senior Laura Macke was fouled and missed both free throws, but once again the rebound went out of bounds off a Jackrabbit. K-State got another chance to pull away, and this time it was Lee at the line.

She finished the game with four-straight made free throws to ice out South Dakota State.

Lee wound up with 38 points — setting a school record for 30-point games — 14 rebounds and six blocked shots in 37 minutes of play with her main backup out.

Sundell had one of the best games of her young career when the Wildcats needed it. The point guard scored 16 points of her own, assisted on 10 more baskets, stole the ball five times and only turned it over once. She played 38 of 40 possible minutes.

The Wildcats will have the week off and hope to get their three missing players back before next Saturday’s battle with Oregon in Manhattan.