President Richard B. Myers is retiring from Kansas State on Feb 11. He began as the interim president in April 2016 after former K-State President Kirk Schulz departed to be president at Washington State University.

As Myers prepares for the next phase of his life, K-State students and faculty members reflect on his time at K-State.

Thomas Lane, vice president for student life and dean of students, said he remembers wondering what working for the former Chairman of the Joint Chiefs of Staff would be like.

“I was a little nervous when I first met General Myers,” Lane said. “But he is the most humble leader I’ve had the chance of working with.”

Lane said Myers helped him feel a part of the K-State family.

“When I was first coming to campus and just trying to get a sense of who he was, he just put me at ease immediately,” Lane said. “I’ll never forget that: how welcoming he was to me coming to K-State. He just made me feel right at home, he treated me like I was a Wildcat from the start, and that just made me thankful that I had him as the president who hired me.”

Josh Diazdeleon, junior in elementary education, serves as the Student Governing Association basic needs director and as a student ambassador. He said these leadership positions have helped him appreciate Myers’ demeanor.

“He never carried himself as if he was higher than anybody else on campus,” Diazdeleon said. “You could see him walking around on campus often, which I thought was important. He always seemed to be very well connected to students.”

Laurel Littrell, director of library planning and assessment at Hale Library and faculty senate president, said Myers has also been well connected to staff and faculty members on campus.

“President Myers has a very collaborative approach,” Littrell said. “He really likes to get as much input as possible. So, he has made sure that there are both faculty and staff representation, and Student Governing Association representation, on committees and when he’s getting feedback.”

Littrell said the faculty senate presented Myers with a plaque to thank him for his close work with them.

“A lot of times, people will have us put plaques on campus somewhere that’s meaningful,” Littrell said. “President Myers’ plaque is going to go in the Leadership Studies Building because he taught classes there, and that’s a really important place for him on campus.”

Littrell said that she dubbed Myers with a new nickname at his last meeting with faculty senate leadership,

“I called him the King of Crisis Management,” Littrell said. “He laughed and said, ‘Sometimes I think crises follow me around,’ and he talked about a friend that told him, ‘Maybe it’s you.’ I’m pretty sure that’s not the case, but I’m awfully glad that he’s been around when the crises have come.”

Michael Dowd, senior in animal science and global food systems leadership, serves as the student body president. He also said that Myers’ legacy would be about how he handled those crises.

“In the last five years, there have been a number of large-scale crises,” Dowd said. “I think President Myers’ legacy is certainly going to go back to being the person that is staying the course, steering the ship and bringing us to where we need to go.”

Lane agreed that one aspect of Myers’ legacy would be his steady leadership through challenges such as the COVID-19 pandemic. However, he said another part of his legacy will be with student life on campus.

“I think one of the legacies that President Myers will have with regards to student impact and enhancing student life is his leadership with the Morris Family Multicultural Student Center,” Lane said. “He was pivotal in getting that project over the finish line, especially with our Kansas Board of Regents and private fundraising efforts.”

Be Stoney, interim chief diversity and inclusion officer and professor of education, also said the campus community will remember Myers for ensuring the construction of the Morris Family Multicultural Student Center.

“What I liked about him being so instrumental is that he just didn’t focus on a specific group. His focus was on all students,” Stoney said. “I strongly feel that the Center will eventually bring us all together to understand its purpose: not to divide us but to bring us together.”

On top of helping to build the Morris Family Multicultural Student Center, Dowd said Myers’ ability to raise funds for K-State would long be remembered.

“He was the main leader on the K-State Innovation and Inspiration Campaign, which raised about a billion dollars for K-State’s future success,” Dowd said. “His relationship with our loyal alumni and getting all of those different pieces of the machine to work together and fundraise for the same causes have truly been remarkable, and I think that’s what’s going to be felt on campus.”

Myers’ ability to build relationships with people is something Stoney said she would not soon forget.

And with all Myers has done for K-State, Diazdeleon said the outgoing president has set the standard for what it means to be a Wildcat.

“General Richard B. Myers is the definition of somebody who bleeds purple,” Diazdeleon said. “When people say they bleed purple, they’re definitely going to have to reflect a little bit on who General Myers was.” 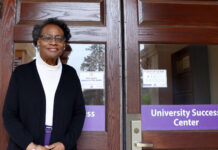