Kansas State’s Intercollegiate Horse Show Association equestrian team closed its season with an impressive win — with more to come for one rider — but this season wasn’t just about the ribbons.

After COVID-19 washed shows from the books, this year was the team’s first time competing. After a few seasons of going back and forth with coaches and trainers and not having many competitive riders in the past, the team picked up the pace this year.

“This has been probably one of the best years since I’ve been on the team,” Olivia Rigdon, senior in animal science and social media chair, said. “When I first got here, we didn’t really have much of a team. This year we got a bunch of girls that were interested in being competitive, and we’ve been lucky to have found a trainer willing to take us to all these shows and be competitive with us, so that’s shaped the way the team has grown. This is the most team-like the team has even been, which is awesome.”

Head trainer and coach Ann White has held her position with the team for two seasons. She is also the founder and owner of Vermillion Valley Equine Center. With her guidance and leadership, riders have seen vast advancements.

“Ann is amazing: she’ll be humble about how amazing she actually is, but we definitely wouldn’t be where we are without her,” Meagan Parkins, senior in marketing, leadership studies and social and fundraising chair, said. “It’s been a lot of fun seeing everyone improve, and I’ve learned a ton too, so I definitely wouldn’t be where I’m at without Ann and the other girls.”

With newfound direction as well as incorporating the club and competitive side of the team, the group has grown closer and made leaps in their skills. Members can compete in western or English riding or take lessons and involve themselves in team social events.

“The friendships are amazing, all of us are super close and know each other well so that just adds to all of it,” Parkins said.

The team’s last horse show of the season took place at Missouri State on March 26-27. K-State found success against the 12 opposing teams, taking first place at Saturday’s show and second at Sunday’s regional show. They also picked up second place in their region for the overall year.

“The team is riding very well for as new and young as we are,” White said. “We took a full team and won several of our divisions. This year far exceeded my expectations from where these girls — and boy — rode from the first time I saw them to how they’re riding now: they’ve just improved immensely. Now that COVID is over and we’ve actually had a run at things, it’s only going to get better. We want to let people know it’s a thing that anybody can do.”

For Rigdon, her lifetime of horse riding is paying off. She and teammate Jennie Yount ride in the highest class — intermediate — and competed in regionals. Rigdon is moving forward this weekend.

“For me, on that Saturday, I placed high enough in a lot of my classes that I was able to move on to regionals the next day, so that was really cool,” Rigdon said. “Once we got to regionals, it was Jennie and I competing against a few other teams. I ended up winning the over fences, and I got second in the flat class. That’s where they judge you on the flat so you’re not jumping, just walk, trot, cantering in a circle and they’re judging the way you ride, your position. If you get first or second in any of your classes, it qualifies you for zones, which is this coming weekend at Texas Tech. I’m very excited.” 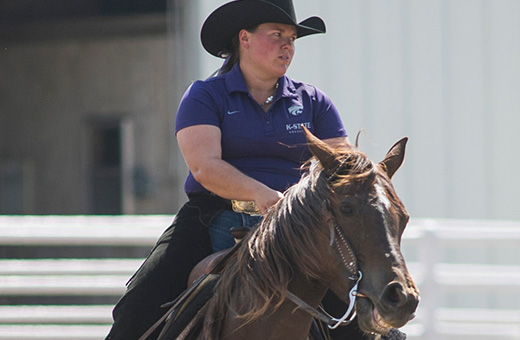