The crowd roared as the horse was released. Kicking, the horse careened across the arena as a camera flashed.

Macey Franko, sophomore in journalism and mass communications, took the first-place title in the Union Program Council’s 47th Annual Photography Contest with her photo, “Back in the Saddle 2.” Taken at the Kansas State rodeo, the photo depicts a rider precariously perched atop a horse, one hand on the reins and barely keeping his balance. Franko felt that she captured the perfect rodeo photo.

“The specific photo is of saddle bronc, which is one of my favorite events because there’s just so much movement,” Franko said. “I’m very familiar with rodeos and that event, so I knew what I was watching for. I really wanted a photo that was preferably when the horse was in midair and the rider was in the ideal position with his hand up.”

Many elements of an image often have to align to get the best photo. After taking many shots, Franko felt she had achieved just that.

“The things lined up perfectly,” Franko said. “I was really hunting for that photo, and then I got it and that made me very happy.”

Franko said the amount of support she received from her peers throughout the creation and submission process was surprising and pleasing. Many students stopped by the Willian T. Kemper gallery to see “Back in the Saddle 2” and cast their vote for Franko’s work.

REVIEW: 'It Ends With Us' follows atypical romance after college

“It was cool just seeing my work up in person,” Franko said. “A whole bunch of my friends were really excited for me, which made me even more excited.”

Contestants could take photos specifically for the contest or pull them from their personal portfolios. Lina Sattarin, junior in journalism and mass communications and contest participant, said she liked the ease with which she could choose and upload her submissions.

“I came up with the content I submitted for this photo contest by looking through my previous work and choosing some of my favorite images I have taken,” Sattarin said. “I liked how easy it was to submit your photos and vote for a winner.”

This photography contest has provided an avenue for students to exhibit their work since 1975. Paxton Stover, graduate student in history and graduate advisor for the UPC arts committee, said he appreciated being part of such a storied event.

The Annual Photography Contest has gone through some changes over its many years. Stover enjoyed looking through old stipulations from past contests to see how much the competition evolved.

“It’s really nice to see the different iterations the contest itself has gone through,” Stover said. “I was able to pull up the different rules and some of the older versions that it had to kind of get inspiration, see what worked and what didn’t and see how much it’s changed.”

Students were allowed up to three submissions this year. This meant the UPC arts committee had its work cut out for it in terms of picking which ones to display.

“I know that we had 54 different students actually submit photos for consideration,” Stover said. “We had over 150 different photos that we had to go through and narrow down to our pool of just 54.”

Though the committee was pleased with the number of submissions this year, they hope even more students are interested in the future.

“Next spring, when it rolls around and we have the next batch of people in UPC planning the event, hopefully, more people will get involved,” Stover said. “I hope that this allows people to see what UPC does and get more involved in the coming years.” 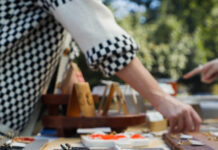