The 11th Little Apple Pride Parade starts at 11:30 a.m. on Saturday, April 23, in City Park near the Manhattan City Pool and wraps up near the activity center with a festival awaiting to celebrate Pride.

Kevin Stilley, treasurer of Flint Hills Human Rights Project, has been a part of Little Apple Pride since its inception in 2010.

“Pride was organized by LGBT and Allies, the forerunner of Kansas State SAGA, with a rally at Triangle Park and a parade was added the second year,” Stilley said.

Little Apple Pride was launched so the LGBTQ community could show support for themselves and their loved ones.

“Our mission is to let the greater Manhattan community know that there is a strong LGBT community here,” Stilley said. “It is also to affirm to ourselves that we belong and to let younger members know that it’s ok to be who they were meant to be.”

Anyone is allowed to march, and if you do not want to walk for the entire thing, you can jump in at any point. Members of the LGBTQ community and allies will all march together.

Little Apple Pride is more than just the parade. There will be several businesses, vendors, drag performances, live singers, music and potentially a magic act.

Since the event has not occurred since the onset of COVID-19, they are unsure how many people to expect but are hoping for a good turnout.

“In 2019, approximately 1,000 people were in attendance, but this is the first post-COVID event — so it could go up or down,” Stilley said.

The parade and festival are family-friendly events, and all are encouraged to come. However, following the festival, there will be an afterparty at Tate’s in Aggieville. 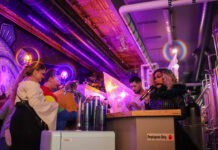