When country music star Josh Turner took the McCain Auditorium stage, he started the show raising a loud applause by saying he was honored to play in the “real Manhattan.”

Turner performed on Sept. 22 at McCain in front of a nearly sold-out crowd. He told the crowd he “brought his country music-ometer so he could see what kind of fans he was really dealing with.”

It was Turner’s first time being on Kansas State’s campus, and he spent some time before his show playing basketball at the Peters Recreation Complex. He was also interviewed by Corey Dean from B104.7, where he told listeners he has never stopped touring.

Turner sings both country and Christian music and is most known for his deep voice. He has sold more than 8.5 million units and has 2.5 billion global streams. Turner said his most played song is “Time Is Love,” which he sang for this audience Thursday. According to the Billboard, this song spent 25 weeks on the Hot 100 chart.

On stage, Turner was accompanied by his band, and he did not have an opening performer. He played for about an hour and a half, pausing only to introduce the next song. Turner performed two Hank Williams’ songs, “Country State of Mind” and “I Saw the Light.” He also performed “Long Black Train,” an older original, and “Firecracker,” a song from his new EP. Much of Turner’s music is christian-based and it encourages listeners to seek the one true God. His music provides fans a glimpse of what is important to Turner — God, faith and family.

By the end of the performance, Turner had the audience on their feet, clapping and singing along to the music. The audience interaction led to a three-song encore. Turner gave Manhattan quite an exciting show.

The “King Size Manger” special will debut on Nov. 18 and will be available on DVD. The holiday tour is set to begin on Dec. 2 in Georgia. 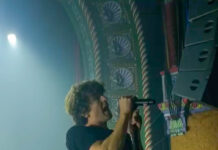 The Brian Setzer Orchestra rocks the house of McCain