Home Culture Sister Cindy Returns: ‘Be a Ho No Mo’ sermons on campus

Editor’s note: This article was co-written by Alexander Rewerts and Olivia Chace; however, in the print edition, only Rewerts was credited. There was a page filing mistake on the Collegian’s end, and the version of the print page we submitted was incorrect. Chace and Rewerts are both correctly and properly credited in this online version.

On Sept. 27, the atmosphere on Bosco Student Plaza was tense given the presence of radical Gospel preachers who partook in shaming promiscuity and condemnation of Kansas State’s students.

Cindy Smock, an Evangelist Christian preacher commonly known as Sister Cindy, first made her rise to fame while sermonizing to university students across the country with her husband, Jed Smock, or Brother Jed. In recent years, the popular social media platform, TikTok, heavily contributed to their stardom, giving the world a glimpse at one of America’s most active religious conversion figures to date.

Since the passing of Brother Jed in June of this year, a widowed Sister Cindy carries on the religiously-motivated ‘Be a Ho No Mo’ campaign, bringing a group of conservative evangelicals to help with her open-air preaching.

Beginning her sermon at noon, Smock naturally became enveloped by swarms of intrigued students. Before long, hundreds of students and staff intermittently stopped to wonder what Sister Cindy was shouting about.

For four hours, Sister Cindy and her elderly companions rambled on about the salacious lifestyles of college students, particularly women. Smock said Mexican restaurants and margaritas correlate with carnal sexual acts committed after consumption. She even said this was her devious plan to seduce her late husband, Jed Smock, before her own religious conviction. Sister Cindy continued to commend any self-proclaimed virgins on campus, giving them buttons that read ‘Never A Ho.’

“To the men who haven’t had their privates defiled – don’t let her take your virginity!” Sister Cindy said.

On her second trip to K-State, Sister Cindy seemed to have discovered a new threat she insisted on warning students of – the prevalence of “vampire ho’s” and “establishment ho’s.”

“A vampire ho is a nickname I have for a girl who goes after virgin and Christian men and sucks their virtue out of them,” Smock said. “An establishment ho is older, like a millennial, who has been a ho for a long time and influences others to be ho’s too.”

Several students in attendance watched and listened with interest, standing in the sunny student plaza for over two hours. Most students had no genuine interest in what Smock was preaching, often mocking and shaking their heads at her behavior.

“I feel like she takes drugs,” Neal said. “She has to take drugs to believe what she’s saying.”

Mara Matthews, sophomore in regional and community planning, said both she and her friends “don’t support Sister Cindy, but [they] do support laughter.”

On the other hand, many others outright reject Sister Cindy’s presence on campus. Students like Katie Bustamante, freshman in athletic training and rehab sciences, are of the opinion that, even ironically, entertaining her is wrong.

“I’m a little embarrassed to be here and feeding into her preaching, especially her part about calling women ‘feminazis,’” Bustamante said. “I genuinely think she’s kind of crazy.”

Most K-State students remain in persistent opposition to Sister Cindy and her religious values. Despite this, several students seem to find utmost humor in the lunacies of Sister Cindy. In contrast, others are gravely insulted by her, believing her teachings to be counterproductive and offensive to women and LGBTQ students. One student was enraged by Sister Cindy’s tirade, confronting Cindy’s associate mid-speech and complaining about the offensive and out-of-touch beliefs before storming away.

Soon after this confrontation, an adult man who supposedly is a member of K-State staff stopped Sister Cindy during her speech, saying, “You’re out of time. You have to stop, or we will call the police.” Cindy rebuked the man without fear or hesitation, calling him an “establishment ho.” Police did not intervene after this situation, and Sister Cindy resumed her outlandish accusations that K-State students’ souls have been damned by impulses.

Sister Cindy, perhaps this generation’s most determined religious figure, wants the students of K-State to know that in spite of her hate-fueled prejudice, she believes they can repent.

“I love you. Jesus loves you more,” Smock said. “Repent your sins and follow him.”

The validity of Sister Cindy’s self-righteous approach on the topic of college students’ private right to promiscuity is irrelevant — many students laugh and ridicule while others remain distressed and upset. This reactionary divide in the student body brings up the subjective debate as to whether or not Sister Cindy — and speakers like her — should be allowed to use the university as a platform for resentful dialogue. 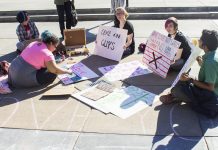 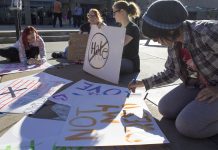