Home Culture Review: The 1975’s ‘Being Funny in a Foreign Language’

The 1975 released their newest album, “Being Funny in a Foreign Language,” on Oct. 14. While some of the music is innovative and different from their other records, listeners may find parts of the album predictable.

The album opens with a song called “The 1975.” With leading piano phrases, the anticipation builds. The genius placement of this song within the album gets the audience excited for what’s to come.

The next two songs, “Happiness” and “Looking For Somebody (To Love)” are characterized by the use of brass instruments that add jazzy undertones to the music — the use of this kind of sound is new to The 1975’s discography. While the songs are somewhat forgettable, they’re still good listens.

Opening with deep cello strokes, “Part Of The Band” is unlike anything The 1975 has put out thus far, and the execution is artful. At about three minutes and nine seconds, there’s a beautiful swell of brass and orchestral sounds that create what can only be described as euphoria.

“Oh Caroline” is one of the most popular songs of the album, most likely because of how reminiscent it is of one of their previous albums, “I like it when you sleep, for you are so beautiful yet so unaware of it.” The 1975 played it safe with this song — it’s boring. Those who just want to listen to more of the band’s old sound will be pleased, but it’s disappointing for those hoping for something new.

“I’m In Love With You” is again safe, typical and boring. So is “Wintering.” The slowest songs on the album, “All I Need To Hear” and “Human Too” add a nice change of pace to the album, although the former is better than the latter.

The stars of the album are the last two songs: “About You” and “When We Are Together.” “About You” is the perfect mix of the band’s old and new sound, and the bridge cuts through the chaotic instrumentals in the most beautiful way. “When We Are Together” is much less upbeat; in fact, the song almost seems to leave the alternative genre and edge into Americana due to the use of the fiddle and the mandolin. While seemingly an odd way to end the album on such a note, somehow it just works.

“Being Funny in a Foreign Language” is made up of quite an odd mixture of lazy songwriting and masterful composition. While many songs on the track are bland, it’s worth a listen simply for the few striking and unforgettable pieces. 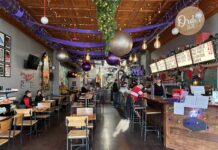