Home Culture Manhattan magician: The man under the hat

Editor’s note: The original featured photo, a photo of Aggieville from St. Patrick’s Day, was replaced with a courtesy photo from Jack Reid. The courtesy photo was obtained after the story was published online.

Mind reading, crafty card tricks and potential friendly pickpocketing are all fun experiences you may have with Jack Reid, Manhattan’s up-and-coming magician. The 25-year-old local began doing magic professionally about six years ago, deciding to pursue his passion for magic rather than take a college route. In the beginning, Reid struggled with building his business.

“At the time, there were not many resources on how to get started,” Reid said. “There was a lot of struggling, but it turns out I have ADHD, so that threw a curveball with trying to get serious, sit down and do the business stuff, because it was really overwhelming.”

Reid said he has been able to take the leap and create more success for himself this year.

“Before this year I was doing maybe two shows a year. In April of this year, that’s when I started getting like two shows per month, and then this month alone I have 12 shows booked,” Reid said.

Reid has really been impacted by his ADHD and has recently been trying to imbue his performances with more emotion.

‘Reading helps people to be seen’: ReadMHK brings community together

“I’ve been wanting to express myself more intrinsically and kind of express how I view the world. It is hard to write a show … because when you think magic, you don’t think deep, meaningful, tear-in-your-eye kind of thing,” Reid said. “It has been really hard to balance that out and figure out what I want to say. Most of the [performances] have had a hidden meaning of wanting to have fun and being yourself. Right now, the show that I have been working on has been kind of about my ADHD — not expressing that blatantly but taking more softer approaches.”

Reid can be seen in Aggieville on Friday and Saturday nights when the weather is nice, performing for tips from passersby. Recently he has performed indoors at Auntie Mae’s Parlor and Manhattan Brewing Company.

“He is a really sharp guy — really bright and funny,” Denney said. “It’s part comedy and part magic. He keeps the crowd laughing and his allusions are pretty amazing.”

Breezy Scroggs, taproom manager at Manhattan Brewing Company, said after the first time hosting Reid, she knew they had to have him perform again in the future.

“Everyone just loved him. He is super personable and all of his tricks were amazing,” Scroggs said. “Everyone was amazed by the card tricks he did. I really want to have him as a regular gig at the brewery.”

Reid said there is one thing that keeps him driven, even though he has occasional doubts.

“I love magic almost more than anything,” Reid said. “Magic just made the most sense to me and it’s something that I think about all the time. As soon as I get up on stage all those worries and stressors go away, and I just try to kick ass as much as I can.” 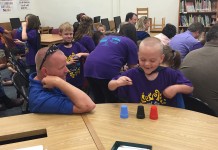