Kansas State announced Jason Mansfield will take over the reins as volleyball head coach after the program parted ways with longtime coach Suzie Fritz in November.

Mansfield’s resume includes seven NCAA Final Fours and one national championship between his time at Stanford and Washington.

“His championship pedigree, emphasis on team culture and building relationships — both inside a program and on the recruiting circuit — are what set him apart from other candidates,” Athletic Director Gene Taylor said. “I know he is excited to get started, and I cannot wait for our student-athletes and all of Wildcat Nation to meet him.”

At Washington — where Mansfield spent the last five seasons as an assistant coach — Mansfield helped guide the Huskies to four Sweet 16 appearances, the Elite Eight in 2019 and the Final Four in 2021. The team also collected seven All-America honors between three Huskies.

The end of the Suzie Fritz era at K-State

Mansfield also spent time between Illinois and Stanford as an assistant head coach. During his time at Stanford, Mansfield coached 17 different All-Americans, four National Players of the Year and four future Olympians.

“I’m so excited to get started. I can’t wait to meet the team and to start forming those relationships,” Mansfield said. “We will compete at the highest level that we can every day, and we will do it with passion and unity. I came to Kansas State to build a great program, a program with high character, strong connections and a passion for learning.” 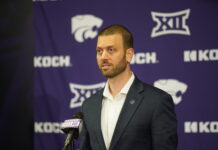 Mansfield looks to be the next stellar K-State hire

No. 5 K-State falls in a signature Big 12 battle