It is a cold dark night, and Brooklyn Klahr, with pepper spray in hand, begins the eerie walk home from her shift in Aggieville. Klahr said this is a new addition to her routine because she cannot afford the monthly fee after the City of Manhattan began charging for parking Jan. 17.

According to The City of Manhattan’s website, the garage and streets in Aggieville are free for two hours. After that there is a charge of $2 per hour and a $10 daily maximum. If the car stays overnight there would be a $10 fee from Sunday through Wednesday and an $8 fee Thursday through Saturday.

“I have not signed up for a parking pass, and I will walk to work everyday which is deeply unfortunate especially given the freezing rain lately, and by the time I get off it is getting dark or is dark,” Klahr said. “It is so sad to know that there are so many students and young people working in Aggieville, and it will be really dangerous for them walking home in the dark because they cannot afford parking.”

Klahr, an Acme Global employee, said Aggieville businesses are coming together to promote a petition for change.

“We are leaning on each other and encouraging people to sign this petition,” Klahr said. “We are really lucky because Aggieville is such a small district so it worked out perfectly that I had a friend at Bluestem who was talking to her manager about wanting to start a petition, and I just said that is perfect because we both run our companies’ social media so we can do this together.”

“When we first heard about [the cost] my coworkers and I were discussing how we did not want to pay it. This inspired us when we realized everyone was so passionate about it, and no one was really doing anything to make a change,” Devoe said. “Me and two of my other coworkers brainstormed things we could do to speak up about all the things happening in Aggieville, and we settled on this petition.”

Klahr said after handing out flyers she received support from other Aggieville businesses.

“So many businesses said it was amazing and that they would sign the petition and share it with everyone they know,” Klahr said. “We just have such an amazing community down here and there were a lot of really positive outlooks and excitement about making a change.”

“We have all banded together during this time because we all have the common ground of being in this tough spot of paying for the parking and we all make similar incomes so we are in the same situations,” Devoe said. “This has been a huge way for us to come together as a community to advocate for our employees and students.”

“We are either forced to pay a fee regardless because we will either be ticketed for parking here too long or forced to pay for the parking garage because even the surrounding streets and city park will have the parking technology,” Harris said.

“Here there are no shifts that are less than two hours, that is super rare to have that,” Klahr said. “That is a big thing because we cannot just move our cars, number one, because you cannot leave work.”

April Wagnor, manager at Acme, said the added expense and effect on her life frustrates her.

The money is also an issue for Devoe as a recent K-State graduate.

“When I heard these prices it was so surprising because it is a lot of money for me to pay per month,” Devoe said. “I was very disappointed in the prices and with the people who are in charge not considering the low incomes of students and Aggieville workers.”

Devoe said the petition is receiving more signatures than she originally expected.

“It shows how passionate people are about standing up for each other and our community,” Devoe said.

“My manager is asking whoever signed the petition to attend that,” Devoe said. “This will make it more likely for us to implement a change, so we are taking steps to organize that and get it up and running for people to physically support the cause.”

Devoe said she is passionate about this cause and wants the public to understand its importance.

“Overall we need to emphasize the fact that this has such a huge impact on Aggieville workers and without the workers it won’t be what it is today,” Devoe said. “This is such a financial burden. We all agree that our jobs are not something we do because we get paid, we do our jobs because we love it. With this we want to stand up for each other and all the other businesses.” 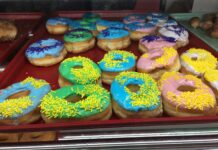 Serving up donuts and sandwiches, Varsity Truck attracts customers even on...